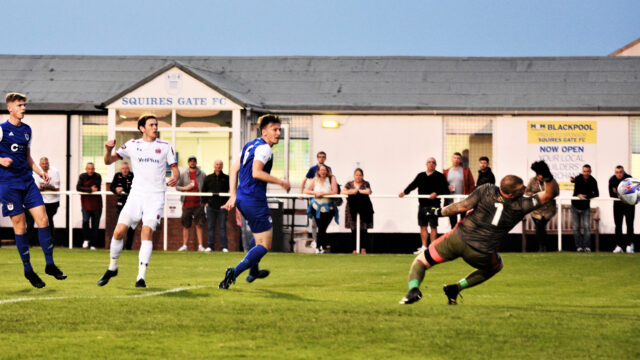 Jim Bentley’s side made the short trip to Squires Gate, as preparations continued for the upcoming Vanarama National League North season.

It was the hosts who got proceedings underway at the Brian Addison Stadium, as both teams looked to keep possession and build momentum.

The Coasters were put under pressure early on as Squires Gate flashed a ball across the face of goal, but the Fylde defence was on hand to turn it behind for a corner. The set-piece was then cleared by the Coasters.

Gate were attacking well and eventually it paid off. Ryan Riley floated a free kick into the area, Dean Ing leapt at the front post to flick a header towards goal and into the far corner.

Despite Jim Bentley’s side responding well to going a goal down, it was the hosts who extended their lead. The Squires Gate striker burst into the area before being brought down and the resulting penalty was converted into the bottom corner.

A trialist winger put some dangerous crosses in as we looked for a way back into the game. Then, the pressure paid off. Ben Tollitt found space in the area to thump an effort into the back of the net, giving the ‘keeper no chance at his near post.

Although the Coasters looked likely to grab an equaliser, it was Squires Gate who again had the ball in the net. A bobbling ball dropped to Jamie Ramwell, who clinically finished first time under Chris Neal.

In a half where it was non-stop goal action, the Coasters managed to pull another goal back before the interval. A cross whipped in from the left found the trialist striker towering above the Squires Gate defence to finish powerfully past the ‘keeper.

After going in a goal down at the break, Jim Bentley’s side came out fighting in the second half. The introduction of Luke Burgess, Nick Haughton and Max Johnstone sparked the visitors into life.

Burgess and Haughton were combining well in the middle of the park, trying to create an opening which would see them level things up.

A trialist right back – who was also introduced in the second half – was finding space down the right to whip a couple of dangerous balls into the area, but Squires Gate cleared their lines, relieving any pressure the Coasters kept applying.

Fylde were left to pay for their missed chances. The hosts won a free kick just outside the area. A superb save from Johnstone denied Squires Gate from the set piece, but on the follow up was a trialist, who finished into an empty net.

With just a minute to play, the Coasters netted their third. Haughton drifted into the area and unleashed a venomous shot towards goal, however, on the way towards goal, the ball deflected off the back of the trialist striker for his second of the game.

That turned out to be the last chance of the game, as the referee brought an end to proceedings in what was a testing, but beneficial pre-season fixture.