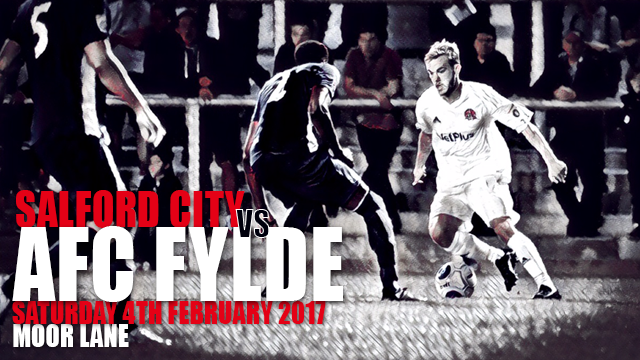 AFC Fylde suffered their heaviest defeat of the season at the hands of promotion rivals Salford City.

A hat-trick from Salford midfielder Jordan Hulme, plus strikes from Billy Priestley and Mike Phenix, condemned the Coasters to just their fourth defeat of the campaign

Midfielder Tom Holland, who joined the club on loan earlier in the week from Swansea City, was handed his debut in place of the injured Andy Bond, whilst Richie Baker replaced Brendon Daniels.

There was a prolonged break in play inside the opening five minutes when Holland and Simon Grand collided going for a loose ball, but both were back on their feet within a few minutes.

The Coasters almost broke the deadlock on the 10 minute mark when Baker’s corner was met by the head of Dom Collins but Dan Bradley couldn’t beat the goalkeeper with a goalbound flick.

However it was the hosts that drew first blood just moments later. Josh Hine launched a long throw into the box and Priestley flicked a header into the far corner of the goal.

Hine himself was close to added his name to the scoresheet, but Rhys Taylor was quickly off his line to smother striker’s effort.

The hosts doubled their lead inside 15 minutes when a corner was cleared only as far as Hulme and the midfielder struck a low first-time shot into the bottom corner.

The momentum was with home side and Priestley really should have grabbed his second when the ball dropped to him in the area, but he lashed a left-footed effort over the bar.

Priestley was proving a real thorn in the side of the Fylde backline and fired an ambitious overhead kick into the crowd as the Coasters struggled to clear.

Caspar Hughes found a rare opportunity to shoot but his attempt from the edge of the area was rushed and well over the bar. Bradley hooked an attempt wide of the post as the whistle went on an underwhelming half for the visitors.

Salford fashioned the first chance of the second period from another long throw into the area but Patrick Brough lashed well over.

How Salford didn’t extend their lead further still was a mystery after Nottingham headed just over after an almighty goalmouth scramble.

The let-off appeared to kick-start Fylde into gear and Bradley saw a shot blocked from 10 yards after the first real passing move of the match from the visitors.

Former Fylde man Brad Barnes tried his luck as the momentum shifted back in the host’s favour, with a vicious volley from 20 yards that was clawed out of the top corner by Taylor.

The Coasters were certainly looking more likely after the break and Bohan Dixon wasn’t far wide with a low drive from distance. The towering midfielder powered through a minute later but was adjudged to have dived by the referee after racing into the box.

However, Salford put the game out of sight with 15 minutes left to play. Hine scuffed a low shot towards the back post from the edge of the box and there was top scorer Mike Phenix to apply the finishing touch.

Collins had a chance to grab a consolation goal for the shell-shocked visitors when Steve Williams headed a corner back across goal but the defender couldn’t get a strong enough connection and the goalkeeper pounced on the ball.

Rowe had his only real opportunity of the afternoon when Daniels did well to dig out cross from the left but the Coasters marksman put his first time strike narrowly wide of the post.

The hosts grabbed a fourth goal in the final minute of normal time. A header at the back post crashed back off the bar but Hulme was quickest to react in the middle and forced the ball over the line.

It was to get worse for Fylde in the fifth minute of added time when the hosts were awarded a penalty for a trip on substitute Nick Haughton. Hulme stepped up to complete his hat-trick with a chipped spot-kick down the middle.