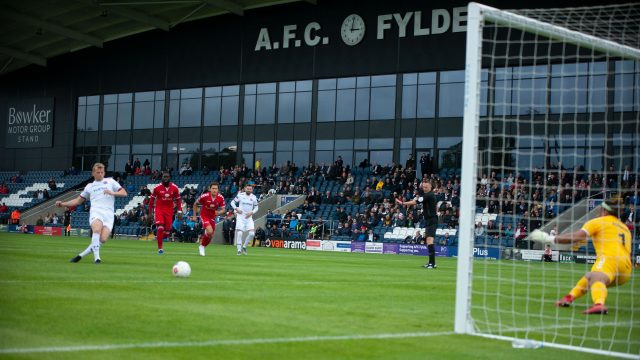 AFC Fylde made it two league wins from three at Mill Farm on Saturday, with Danny Rowe’s early penalty being the decisive factor in a close encounter.

It was a fast start to proceedings, with AFC Fylde being awarded a penalty in just the third minute, after Mark Yeates’ corner was handled in the box by Obileye.

With one converted penalty under his belt already this season, Danny Rowe stood up confidently, sending Ashmore the wrong way, and giving Fylde the lead.

The Coasters looked good value for it, with Rowe going close again with a stooped header shortly after from Dan Bradley’s cross.

Luke Burke was the next to threaten, bombing on before unleashing a powerful effort from distance, on this occasion though, Ashmore was equal to it.

Of the new recruits, James Craigen went closest to opening his account, thundering a well struck half volley heading for the top corner, but Ashmore again did well to deny the second goal.

The game was at mercy to the elements, and with half-time approaching, Umerah’s wild cross-shot almost caught out James Montgomery – but fortunately for the Fylde stopper, it cannoned off of the bar, and out.

Just before the stroke of half-time, it seemed that Ebbsfleet would draw level, as the ball bounced loose in the Fylde box following a corner.

Umerah pounced first to strike, but James Montgomery denied him superbly, making a great low reaction save from a matter of yards.

Although Fylde had good spells, the visitors and picked up where they left off in the second half, with free-kicks and corners piling pressure on the Coasters defence.

Myles Weston was introduced to make a difference for Ebbsfleet and did exactly that, fizzing a fantastic strike goalwards from 25 yards – but Montgomery was refusing to be beaten.

Willoughby came on for the Coasters to stretch the game on the counter, and acquitted himself well in his short time on the pitch.

His lighting pace saw him get the wrong side of Grimes, who bought down the forward, and earned himself a booking.

The resulting free-kick was whipped in by Scott Duxbury, but Fleet cleared their lines well on this occasion.

Kosylo and Williams were introduced late on to see out the tie, with both forwards working hard to chase down loose balls in the blustery conditions.

Ebbsfleet couldn’t find a way back into the game, in part thanks to a solid performance from Alex Whitmore in the heart of the Fylde defence.

The Coasters now have seven points from nine, and Dave Challinor was very happy with a hard-fought win.

“It was never going to be pretty with the conditions, we knew it would be a leveller in terms of how direct they are,” said Coasters boss Dave Challinor.

“We’ve got our goal, we’ve not conceded, Monty [James Montgomery] has made a couple of good saves,” concluded Dave Challinor.

“But, ultimately, we’ve got the three points, and seven in the course of a week is a really pleasing start.”