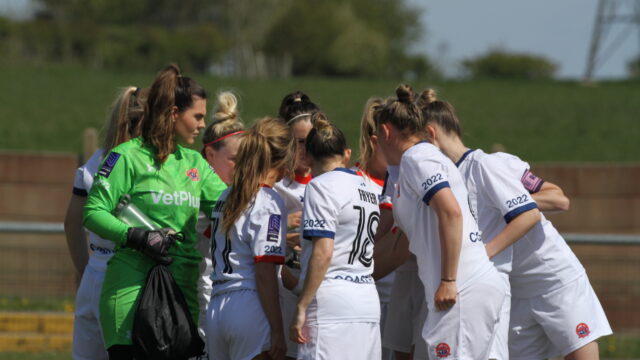 Fylde Women suffered their first defeat of the season on Sunday after a 1-0 away result against Nottingham Forest Women.

The visitors arrived at Eastwood top of the FAWNL Northern Premier Division after an unbeaten start to the season.

Jade Arber controlled brilliantly and took the ball round Savannah Smith, with two defenders around her she kept calm and slotted the ball into the empty net to give Forest the lead.

Not long after, Rosie Axten stung the ‘keeper’s palms with a well struck free kick but Fylde managed to get the ball clear.

In the first half Fylde had limited chances. Most notably a cheeky lob attempted by Hannah Forster before half time.

Just before the break Rachel Brown nearly made it 2-0. She attempted to lob the goalkeeper but the ball nestled on the roof of the net.

Fylde responded in the second half trying to get back into the game.

In the 64th minute Amy Hughes steadied herself to shoot before appearing to be bundled over, but the referee signaled for a corner not a penalty. Moments later Emily Hollinshead and Jode Mortimer were brought on and had a positive impact.

Fylde’s best chance of the game came in the 71st minute from a Laura Merrin corner. A deep ball was headed back across goal and the goalscorer turned defender as Arber hooked the ball off the line.

Faye McCoy had two headers in the last 10 minutes but neither found the target. In the last few minutes the keeper was pressured and had to palm a cross away. Then Emily Hollinshead fired just over the bar.

The win moves Forest into 2nd place in the league, ahead of Fylde on goal difference.