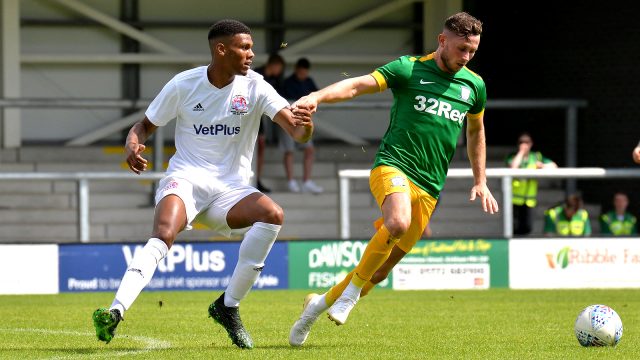 AFC FYLDE succumbed to a 4-0 defeat to neighbours Preston North End in pre-season, with Sean Maguire netting a hattrick.

The game started with high intensity, as the visitors jumped onto the front foot from the get go.

Bodin was one of those making things happen, and racing through on goal earned a penalty, with Jameson the offender.

Preston captain Paul Gallagher stepped up, but his low penalty was a poor one in truth, and Dan Lavercombe smothered it well, keeping the scores level.

This didn’t keep The Lilywhites at bay for too long though, and in the 11th minute after a corner wasn’t cleared, Sean Maguire prodded home the opener.

This lead was doubled just five minutes later as a long ball over the top was controlled well by Maguire, who dribbled goalwards before dispatching past Lavercombe.

Jameson had a chance to half the deficit after Bradley’s knock down from a Yeates’ free-kick, but his half volley was wide of the post.

Things got better for Preston as Bodin had a goal of his own, twisting and turning in the box, before firing into the net.

The Coasters started the second half in much more positive fashion, with Danny Philliskirk heading an effort goalwards in the opening moments.

Despite a better start though, Maguire soon had his hat-trick, picking the ball up on the outside of the box, and diverting the ball low past trialist goalkeeper Jack Ruddy.

A host of changes rang out for both sides on the hour mark, and with it Fylde looked to have more of an attacking threat.

Kosylo, Green and Haughton combined well in midfield to open up chances – with the latter having efforts from distance.

The Coasters came close to a consolation goal as Hemmings’ corner was headed onto the post by Grogan, before it was cleared.

The chance to add a fifth for the visitors came as Grogan bought down Barkhuizen in the box, and the referee pointed to the spot once again.

The Lilywhites however missed their second penalty of the afternoon, as Ruddy did well to fly to his left and turn Daniel Johnson efforts away.

Before the game drew to a close, Ruddy was called upon once again, denying Paul Huntington and Jordan Storey from close range in a smart double stop.

It was another good workout for the Coasters against higher level opposition, with Blackpool the next up at Mill Farm.