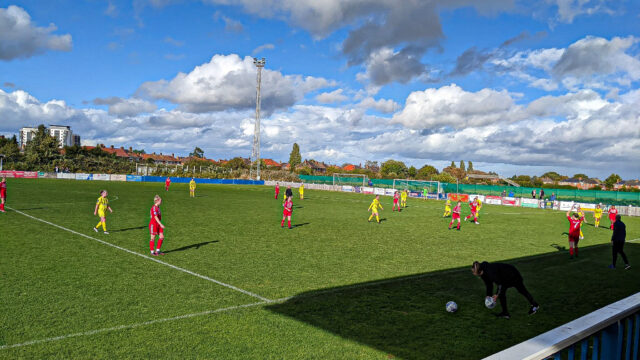 The Coasters secured maximum points at the weekend with a 3-0 over Middlesbrough Women FC, courtesy of goals from Jess Holbrook, Amy Hughes and Mel Bartley.

The impressive win moves Fylde back to the summit of the FAWNL Northern Premier Division table. Bouncing back from last week’s loss at Nottingham Forest, a reinvigorated Fylde came away with all three points against a resilient Middlesbrough side.

Fylde made one change to the starting line-up from last Sunday, with September’s player of the month Emily Hollinshead replacing Sasha Rowe, who dropped to the bench.

Savannah Smith had to be alert early to repel an effort from Armani Maxwell two minutes into the contest. Hollinshead was soon leading the visitors’ attack as she whipped a dangerous cross into the box, but the ball was cleared away.

With 12 minutes gone, Coasters striker Faye McCoy came close to an opener after she found a gap between the Boro defence and fired a low shot just wide of the upright.

The Coasters quickly settled into proceedings with some free-flowing passing moves and a number of dribbles forward by Hollinshead and Jodie Redgrave in the final third.

Jess Holbrook made the early pressure count by scoring the opener directly from a corner kick, as she steered the ball into the Boro net with 17 minutes on the clock.

Moments after the restart, Smith was tested once again in the Fylde net when she tipped over a powerful shot by Boro captain Rebecca Olley. The hosts then went through on goal in search of an equaliser but were halted in their tracks by the offside flag.

The Coasters doubled their advantage in the 24th minute, this time from a corner kick delivered expertly from the right by Laura Merrin, whose cross caused a scramble in the six-yard box before the ball was poked home by Amy Hughes.

Boro pushed forward in search of a way back into the game, but Fylde had Hannah Fryer, Hannah Foster, Olivia Fuller and Alex Taylor to thank for a number of crucial blocks to nullify the threat posed by the Reds.

In the 35th minute, Hollinshead almost made it three as she aimed a powerful shot into the top corner, but it narrowly cleared the crossbar.

Five minutes later, the Reds thought that they had halved the deficit, only for the goal to be disallowed for offside. Working an angle on goal, Brooke Newton struck an ambitious effort from long range that sailed over Smith’s crossbar.

The final big chance of the first period came from Jodie Redgrave, who connected sweetly with a volley, however ‘keeper Rosie Todd showed great agility to palm the ball over for a corner kick. Holbrook sent in the resulting corner, though McCoy was unable to convert from the cross.

At the start of the second half, the Coasters introduced Bethany Donoghue in place of McCoy to lead the offensive line. Both sides attempted to wrestle the initiative in their own favour and attacked with real intent.

Even as the sunshine came out at Bedford Terrace, the chances continued to rain down on the Boro goal. After Merrin angled a cross from the left that almost found the target, Hughes came close when she connected with Hollinshead’s cutback to fire narrowly wide.

The home side responded with some great play down the right by Jess Holder, who delivered an inviting cross, but the resulting shot fizzed wide of the post. Just past the hour mark, the hard-working Redgrave was substituted for Jodie Mortimer to provide extra energy in the midfield.

After creating space in front of goal, Donoghue almost got on the scoresheet but her shot struck the post. At the other end, Boro forward Jess Foster almost found the net in the 71st minute as she rifled a shot only inches over the crossbar.

The Coasters made a trio of substitutions by replacing Taylor, Hughes and Fryer with Mel Bartley, Sasha Rowe and Jenna Carroll. The changes gave the visitors fresh legs in both attack and defence. Rowe was immediately called into action by making several defensive blocks and heading a Boro free-kick away from danger.

In the 81st minute, the ever-clinical Bartley converted Donoghue’s pinpoint cross to net Fylde’s third goal of the afternoon. Refusing to sit back, the Coasters continued to drive forward in search of more goals to put the game to bed.

In the 89th minute, Smith made another smart save when she blocked a low shot with her feet. The Reds came ever so close again from a corner kick when the resulting attempt cannoned off the bar.

The Teessiders were unfortunate not to score and must have wondered what more they needed to do to find that elusive goal. As the full-time whistle blew, the Fylde players congratulated each other after putting in another excellent team performance in front of goal.

Next up, the Coasters are back on the road with a trip to South Yorkshire to face Sheffield FC in the preliminary round of the Women’s National League Cup on Sunday 10 October, with kick-off at 2.00 pm.