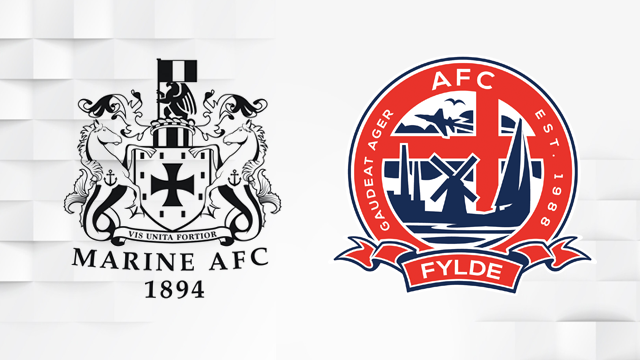 AFC Fylde cruised to a 5-0 victory over Marine in their opening friendly of the pre-season schedule.

Star striker Danny Rowe netted an early brace to put the Coasters in control, before the game was effectively put to bed moments after the break when Sam Finley lashed home.

The fourth was headed in by a trialist before Henry Jones arrowed home the goal of the evening to seal an impressive first run out for Dave Challinor’s side.

Challinor named a team for each half at the Marine Travel Arena, including a first appearance for six of Fylde’s seven summer signings.

Of those, left-back Zaine Francis-Angol provided the first real threat of the evening when he powered down the left and delivered a teasing cross into the area that was turned behind for a corner. Rowe could only find the side-netting from the resultant set-piece.

The hosts hit back with a genuine chance of their own shortly before the 10-minute mark when Matty Hamilton picked out strike-partner Dean Shacklock, however the frontman poked his effort narrowly wide of Rhys Taylor’s near post.

Middle man Andy Bond was a whisker away from giving Fylde the lead on the quarter-hour when the ball broke kindly inside the area but his improvised outside-of-the-boot strike was inches wide of the far post.

However, just four minutes later there was a familiar ring to the announcement of the opening goalscorer. Coasters hitman Rowe, who penned a new two-year deal last week, picked up the ball 25 yards from goal and took a touch before blasting a shot past the helpless goalkeeper.

Bond had his second opportunity of the match when he rose highest to head a cross from the right a foot wide of the far post.

Rowe clearly had the taste and went close to adding a second after shrugging off Liam Hollett and firing over the bar.

Second later and Rowe had his deserved second. Francis-Angol did exceptionally well to cut inside two markers on the left and cross for Rowe who teed up Jack Muldoon. Whilst the new man was thwarted by a top save from Steven James, Rowe was there to, rather fortunately, gobble up the leftovers.

The Coasters were enjoying themselves and could have grabbed a third had Josh Langley’s looping header not been expertly nodded off the line by Paul Foy.

David Morgan was the next to see his effort cleared off the line, after Muldoon had capitalised on a goalkeeping error and put the ball on a plate for the midfielder.

The Coasters kicked off the second half with ten changes but the same intent and took just three minutes to add to their advantage. Finley was picked out on the edge of the area and his strike through a crowd of bodies nestled into the bottom right hand corner.

Former Wales Under-21 international Jones was the next to try his luck when he lashed a vicious strike at second-half goalkeeper Ben Barnes that was tipped over the bar.

James Murray fashioned a rare chance for the hosts with 20 minutes to play when he latched onto a pass over the top and beat Taylor to the ball only to chip his attempt agonisingly wide of the far post.

The lead was four a minute later when Jones whipped in a cross from the right and one of the three trialists on display in the second-half powered a header into the bottom right hand corner.

Teenager Serhat Tasdemir saw his precise strike well saved as the Coasters kept up the pressure with ten minutes remaining.

The best was yet to come for the Coasters as Jones got his name on the scoresheet in the final moments. The midfielder took a touch 20 yards out before rifling an exquisite drive across goal into the top left-hand corner.