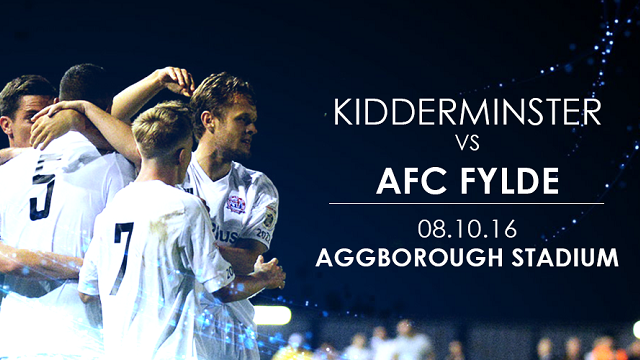 AFC Fylde extended their unbeaten start to the season to thirteen games with a thrilling 3-3 draw against Kidderminster Harriers.

The hosts twice led the game, but needed a late equaliser to cancel out a stunning Danny Rowe strike and James Hardy’s brace.

Dave Challinor made three changes to the side that defeated Stockport County ten days ago with midfielder Sam Finley and Richie Baker coming in for injured duo Caspar Hughes and Dan Bradley, whilst Rhys Taylor made his eagerly-anticipated return in goal.

Fylde, in their reverse orange shirts, made a solid start to the match and almost capitalised on a poor clearance inside the opening five minutes, but Finley dragged his shot wide of the left hand post.

The hosts took a surprise lead in the 13th minute when Arthur Gnahoua latched onto Ashley Carter’s flicked header and raced clear before sliding the ball past Taylor in the Coasters goal. Tyrell Waite was close to doubling their advantage but Carter’s cross was just over his head.

Harriers were taking the game to the visitors and Jordan Tunnicliffe was narrowly wide with a header, although the linesman’s flag was already raised.

Fylde created their first shooting opportunity of the afternoon when Bohan Dixon’s snapshot was turned around the post and almost levelled from the resultant corner, but goalkeeper Sam Hornby clawed Rowe’s flicked header out of the top corner and onto the inside of the post.

Rowe was presented with a set-piece opportunity on the half-hour mark, although it was a little wider than he may have liked and the keeper made a relatively comfortable save.

The Coasters were growing into the match and Finley delivered a delightful ball over the top that Rowe headed into the keeper’s arms.

Taylor had to be on his toes as Kidderminster put into practice a clever free-kick, diving low to his right to keep out James McQuilkin’s strike.

Hardy whipped in an inviting free-kick as the game approached the 40th minute and Dixon rose well but his header lacked real purchase and Hornby collected with ease.

The Coasters drew level in familiar fashion when Rowe received the ball 25 yards out from Dixon before letting it run across his body before an unleashing a rocket of a strike into the left hand corner of the goal.

Fylde kicked off the second half in the ascendancy and Rowe looked to double his tally with an ambitious 40 yard strike that was well held by Hornby.

However moments later the home side were back ahead. Elton Ngwatala got in between two defenders and slotted the ball across goal into the bottom right hand corner.

The Coasters were the width of the woodwork from getting back on level terms when Rowe shifted the ball onto his left foot and drilled a strike against the post.

Not to be kept down for long, Fylde had their equaliser shortly after the hour mark. Finley delivered a fantastic ball into the box and although Rowe’s initial volley was saved, Hardy gratefully lapped up the rebound.

The turnaround was almost complete when Rowe struck a free-kick from an impossible angle that flew narrowly wide of Hornby’s far post.

Harriers’ midfielder McQuilkin fired a set-piece of his own at the Fylde goal but Taylor was well placed to tip the ball over.

The comeback was complete in the 72nd minute and it was a goal of real quality. Finley nicked the ball past three players down the right and drilled a sensational low cross into the six yard box for Hardy to tap home his second of the game.

Kidderminster somehow didn’t grab an equaliser with less than seven minutes to go when Gnahona crossed to the back post but Mani Dieseruwe couldn’t turn home from a yard out, Taylor scrambling across his line in the nick of time.

However, the Harriers were back in the match with their next attack when captain Keith Lowe turned home a long ball into the box from close range. McQuilkin almost nicked it with the last kick of the game but Taylor reacted well to his curling free-kick.