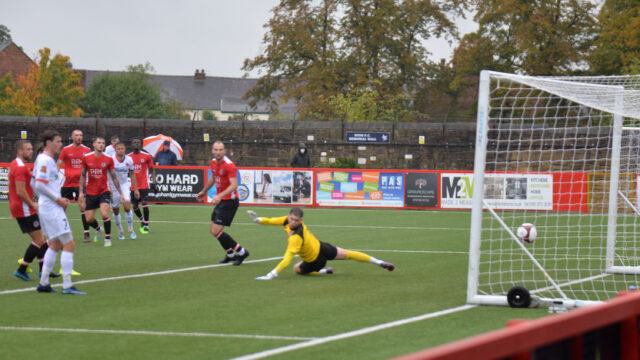 The Coasters progressed into the third qualifying round of the Emirates FA Cup after beating Hyde United 4-2 at Ewen Fields.

Nick Haughton, Kurt Willoughby and Ben Tollitt all grabbed first-half goals either side of Andy Hollins pulling one back for the hosts.

The second half turned a little scrappy as Hyde scored another through Tom Morris, before Luke Burgess rounded off the scoring to give the Coasters a much-deserved victory.

It didn’t take long for Haughton to get off the mark in competitive action. Twisting and turning in the area, he found space to work the ball onto his left foot to unleash a shot into the top corner.

The hosts didn’t let that goal get the better of them. David Perkins was dispossessed in the middle of the park giving Tom Pratt a free run on goal, but Chris Neal was fast off his line to deny him.

Shortly after, the lead was doubled. Kurt Willoughby found space to finish cleverly past Tom Green in the Hyde net, making it 0-2.

Despite the Coasters looking comfortable, the hosts halved the deficit. Liam Tongue whipped a low corner into the front post, Fylde couldn’t clear and Andy Hollins was there to smash the ball past Neal.

There were plenty of goals, and it was Fylde who got their third of the game. Ben Tollitt travelled well with the ball and struck a 30-yard effort under Green and into the net.

The second half was started by the hosts, as the Coasters came out looking to preserve their lead.

Haughton found Burke superbly through on-goal, he looked destined to score, but he unselfishly squared it to Junior Mondal, who couldn’t quite direct it towards goal despite his best efforts.

Moments later, new signing Nathan Shaw had a chance. He drove all the way from his own 18-yard-box to Hyde’s and shot towards goal, though his effort went well over.

Paddy Lane and Kurt Willoughby both went close in the final 15 minutes, before Hyde gave the Coasters a fright.

The ball fell to Tom Morris on the edge of the area, the centre half took one touch and volleyed the ball past Neal and into the bottom corner.

However,  the Coasters were able to put the game to bed on the stroke of full-time. Tollitt ventured forward to be left one-on-one with Green, with no defenders in sight, Burgess arrived for a cultured finish at the far post.

The draw for the next round of the Emirates FA Cup is on Monday afternoon!