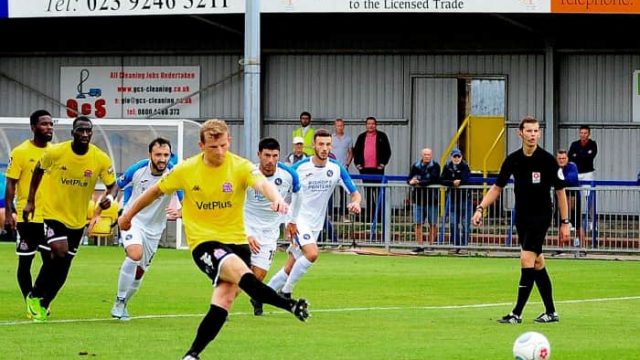 A first-half penalty from Danny Rowe was not enough to give AFC Fylde all three points at newly promoted Havant and Waterlooville.

Dave Challinor made three changes to the side that drew at Wrexham in mid-week with first competitive starts given to Gime Toure, Arlen Birch and Cork City loanee Danny Kane.
They replaced Joe Cardle, James Hardy and Jordan Tunnicliffe who came off early on Tuesday night.

The opening stages were an even affair with both sides playing nice passing football without creating much to test either goalkeeper. The first half chance fell to the hosts’ striker
Nicke Kabamba when Coasters keeper Jay Lynch tried to see the ball out of play following a Havant counter attack. Kabamba managed to poke the ball past Lynch and keep the ball
in play however it would roll out of play just short of the right post.

Just five minutes later and the Coasters were in front. A lofted ball from Rowe was met by Gime Toure who used his power and pace to beat his marker to the ball and draw a foul from Havant defender Ed Harris leaving referee Alan Dale no choice but to point to the spot. Rowe stepped up and confidently buried the ball into the bottom left corner from 12 yards.

Rowe nearly doubled his tally on the half-hour mark. A run from Philliskirk was halted but a ricochet fell kindly to Rowe who blasted an excellent volley towards the top right corner
forcing Havant keeper Ryan Young into an excellent save. A minute later and the hosts should have been level. A low cross from full-back Rory Williams was met by Kabamba
but his effort from close range was somehow tipped onto the bar by Lynch and bounced off it to be cleared by the Coasters defence.

Some lovely passing play in the midfield from Fylde created the next chance as Birch was found in plenty of space down the right by Bond and his low cross into the box was met by
Rowe but his low shot from 15 yards was blocked and cleared by the Havant defence. Chances were at a premium at times, but the Coasters managed the game well in the first half.

The second half was one-way traffic as the hosts stepped up a gear and really tested the Fylde defence. Three minutes after the break and Havant were level as the Coasters backed off striker Kabamba who curled the ball into the top right corner from 20 yards. Gime Toure did his best to create opportunities for Fylde firing wide of the near
right post from 20 yards.

The hosts thought they had taken the lead just a minute later as an error from Lynch gave Kabamba the ball who played it forward to Williams who tapped home from a couple of yards but the flag was up for offside, sparing the blushes of the Coasters keeper. Just before the hour mark, Lynch redeemed himself pulling off a terrific save to deny Robinson’s header from a corner at the far post which looked certain to ripple the back of the net.

James Hardy and later Joe Cardle came on replacing Arlen Birch and Gime Toure and Hardy had the Coasters last chance to grab a winning goal. Danny Philliskirk picked up the ball 30 yards from goal and slipped the ball through the Havant defence to Hardy who stopped and turned before shooting but his effort from 15 yards was blocked and cleared to safety.

Ash Hemmings came on for his Fylde debut with a few minutes remaining replacing Philliskirk but had little time to impact the game. Havant had several half-chances towards the end through Williams, Fogden and Pavey but the Coasters held firm and picked up another useful point on the road. Despite being pegged back in Hampshire the Coasters are still unbeaten this season and sit in 7th place in the table ahead of Tuesday’s visit of Solihull Moors who have enjoyed a perfect start to their campaign.