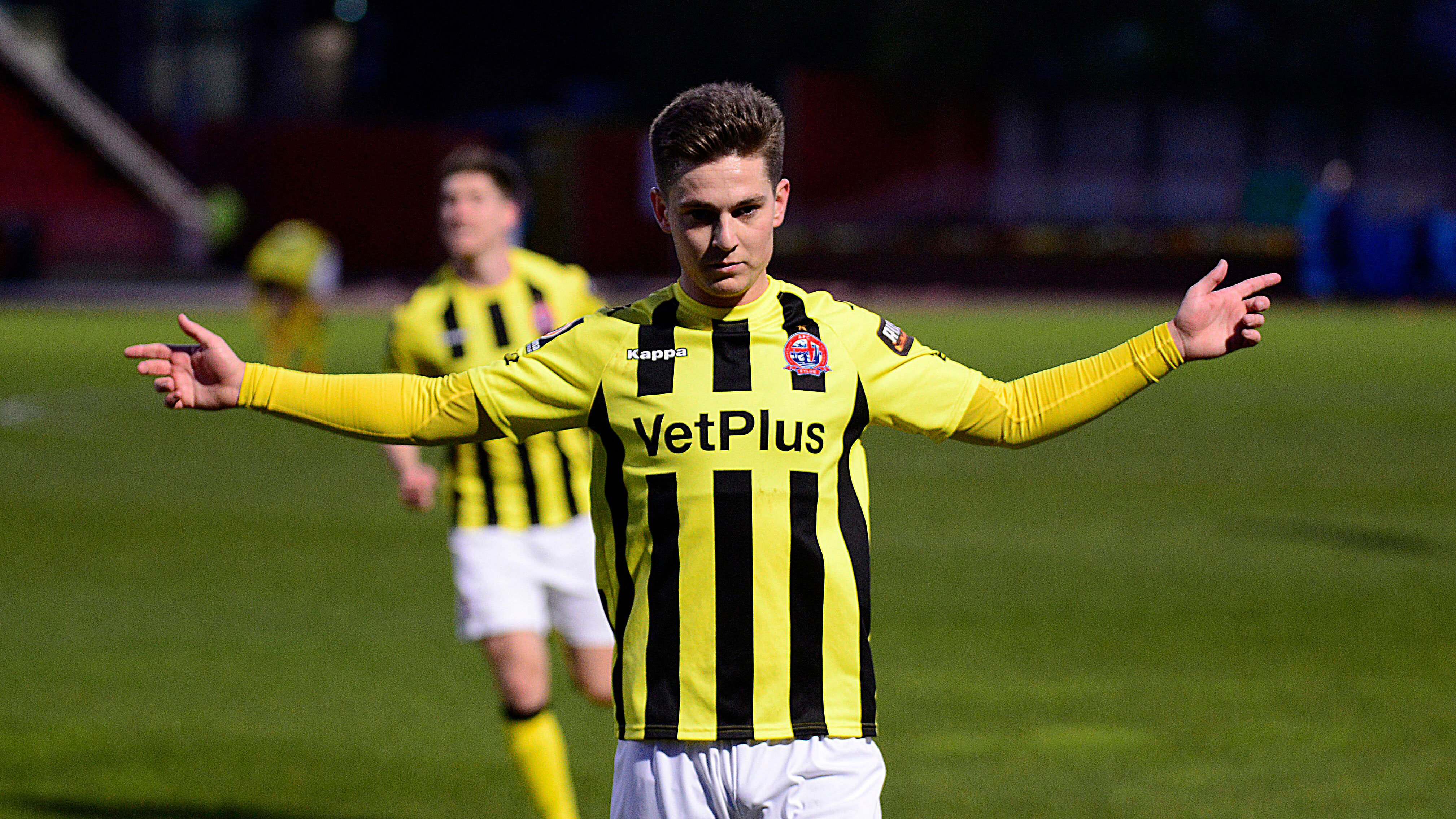 Nick Haughton’s sublime first-half strike was enough for AFC Fylde to record an important win at Gateshead on a chilly Tuesday evening.

Gateshead rallied well and had chances in the second half to win, but an impressive defensive performance ensured a vital three points for Dave Challinor’s side.

The first half started with both teams giving as good as they got, Rowe with glimpses of goal, whilst Gateshead looked to counter with Thompson.

Tunnicliffe had to be alert to quell Thompson’s first attempt to break through the Coasters defence, which he did well, setting up an attack in the process.

After firing a free-kick into the all behind for a corner, Rowe had a golden chance to open the scoring.

With a routine straight off of the training ground, Haughton’s low corner caught everyone out, and Rowe pounced – but his low effort was diverted behind well by Williamson, who had rejoined the side following suspension.

Gateshead threatened with a series of free-kicks out in wide positions, with Greg Olley curling them dangerously across the face of goal – but The Heed couldn’t capitalise.

Tom White drove forward on occasion, and was nearly rewarded after sending an effort from over 20 yards just wide of Jay Lynch’s goal – but the keeper was unmoved, as he was throughout the half.

After snatching at a few half-chances, it was a moment of sheer individual brilliance that broke the deadlock for Fylde, as Nick Haughton followed up his goal against Eastleigh with another.

Jinking beyond two Gateshead players, Haughton struck the ball sweetly, unleashing a dipping effort into the net beyond the helpless keeper Aynsley Pears.

It was a moment that the Coasters needed as, despite their dominance, had found clear cut chances tough to come by.

Gateshead weren’t to lay down and die, however, as they finished the next fifteen minutes strongly, with a variety of passing looking to get beyond the back four.

However, the defence, led by former Gateshead captain Neill Byrne, were in good form, and took the Coasters into half-time with a one-goal lead.

The second half continued on from the first, with Gateshead desperate to draw level and keep their playoff hopes alive.

They were limited, however, to corners and free kicks, with the main chance falling to their centre-backs.

Mike Williamson had an opportunity to level before the hour mark, as a corner kick flashed across the front of goal, but he wasn’t alert to it, and couldn’t stretch out to reach it,

Gateshead’s next big chance, and indeed their biggest of the game, came to Williamson’s defensive partner Mellish, again from a corner kick.

With the ball falling to Mellish 6 yards from goal it looked destined for him to hit the back of the net, but his rushed effort was blazed over the bar, letting the Coasters off on this instance.

The Coasters weren’t totally anonymous in the second half, with chances for Neill Byrne and Nick Haughton presenting themselves – but neither could force a second.

Substitute Lewis Maloney threatened with a free-kick from 35 yards, but in truth, Fylde keeper Jay Lynch didn’t have a real save to make.

This was epitomised late on, as a defence-splitting ball opened it up for Gateshead, before Greg Olley was found unmarked at the back post, however, his tame effort didn’t trouble Lynch in the slightest.

Fylde could perhaps have had a second deep into stoppage time when Lewis Walters broke at speed, but his pass looking for one of his supporting teammates was overhit.

On the night however, it didn’t matter, as the referee brought a halt to proceedings, and Fylde lifted themselves to fourth in the Vanarama National League.

“After the goal we didn’t really keep the ball well enough, and it was a tough pitch – very firm, and it made it a lively game,” reflected Dave Challinor.

“We weren’t at our best by any stretch, but we dug in, we changed our shape and got a foothold, weathering a storm.”

“We’ve been in the position away where we sometimes haven’t defended a lead before, but tonight we’ve defended very well, and a 1-0 win is massive for us.”

“We have players at the top end of the pitch who are capable of causing a threat, and with the attacking power we know we can cause problems.”

“I think the work rate of our players was brilliant – Danny Rowe will be frustrated not to score, but I thought he lead the line unbelievably well and worked his socks off, all for the good of the team.”