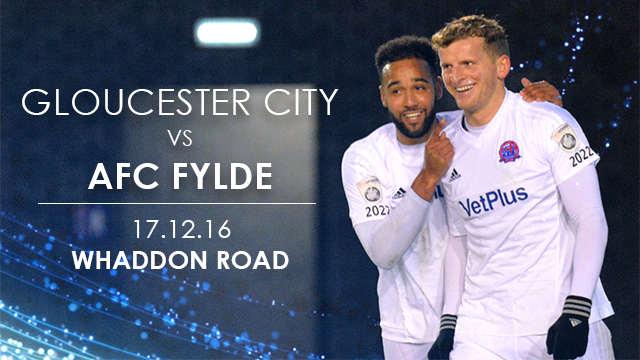 AFC Fylde ensured they will be top of the table at Christmas with an emphatic victory over Gloucester City.

The Coasters warmed up for their festive double-header against local rivals Chorley with a thumping 5-1 win at Whaddon Road to remain seven points clear in the National League North.

Sam Avery opening the scoring for the hosts inside two minutes, but goals from Dan Bradley, Danny Rowe (2), James Hardy and Brendon Daniels made it a comfortable afternoon for Dave Challinor’s side.

Challinor named as strong starting line-up although it was the hosts who went close to opening the scoring inside the first minute when a cross field pass found Tom Webb at the back post, but Rhys Taylor acrobatically kept out the midfielder’s well struck volley.

However the deadlock was indeed broken just seconds later. Joe Hanks delivered a deep cross into the box that Rhys Taylor, under pressure from Joe Parker, dropped at the feet of Avery who had the simple task of tapping into an open net.

Gloucester were looking the most likely in the early stages and Zack Kotwica tested Taylor with a strike from distance.

A moment of magic sparked life into the Coasters performance as Hardy skipped past four challenges after cutting in from the right before forcing Jasbir Singh into a fine save.

Gloucester’s lead was short-lived as the Coasters drew level from the resultant corner. Brendon Daniels’ inswinger wasn’t dealt with and fell kindly to Bradley who poked the ball into the bottom corner from close range.

Taylor had to be alert shortly before the 20-minute mark, tipping Craig Reid’s left-footed effort around the post after he was given far too much time to advance towards goal. Ed Williams flicked a header wide of the far post as the hosts enjoyed a sustained spell of pressure.

Rowe had his first real sniff of goal when he flashed a vicious strike from 25 yards narrowly wide of the post.

However, the frontman had his customary goal a moment later and it was one to forget for Joe Hanks. The midfielder picked up the ball on the edge of his own area but was caught in possession by Andy Bond and the loose ball fell to Rowe in acres of space allowing him to round the keeper and slot the ball into the empty net.

Some intricate play shortly after the restart showed Fylde’s intent to go on and get the next goal. Hardy broke through, backheeled to Bond who played in Bradley but his cutback was agonisingly just behind Hardy who was lurking on the six-yard line.

The youngster wasn’t to be denied for long though when he picked up the ball 30 yards out, turned his man and sent the goalkeeper the wrong way with a delightful finish into the bottom left-hand corner of the goal.

Singh pulled off a fine stop at his near post to deny Rowe a second but could do nothing seconds later as Fylde added a deserved fourth. Macauley Wilson delivered the ball back into the box and Singh’s poor punch was straight to Daniels who headed into an open goal at the back post.

Rowe doubled his tally shortly after the hour as Fylde put the game to bed with a well worked fifth. Bradley did fantastically well to break into the box and his cut-back was placed perfectly into the bottom corner by the Coasters hitman.

Keiran Thomas hit a stinging long range strike in frustration with 20 minutes to go as Gloucester desperately searched for a way back into the contest.

There was no respite for the hosts backline as Fylde continued to probe, Singh getting in the way of Bradley’s low effort to keep the score down.

Hanks had the final chance of the evening when he lined up for a free-kick 25 yards out, but his side-footed attempt was the wrong side of the left-hand post.