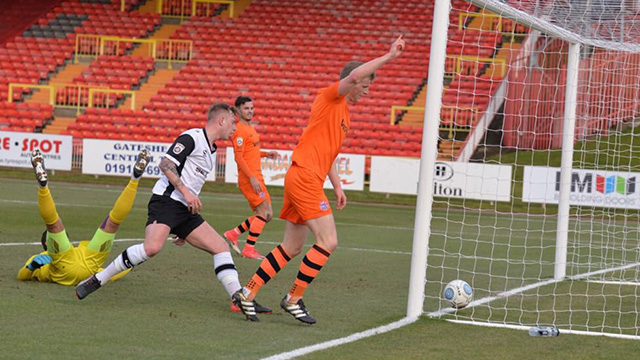 AFC Fylde regained their place in the National League play-off places with a comfortable victory over Gateshead.

Danny Rowe’s first half double sealed the points for the visitors – who now sit seventh in the table – before Richard Peniket bagged a consolation strike in the final seconds.

Manager Dave Challinor made three changes from the side that was held to a 2-2 draw against Eastleigh last weekend with Simon Grand, Sam Finley and goalscorer Henry Jones replacing Sam Stubbs, Callum Chettle and Jonny Smith.

The Coasters carved out a glorious opportunity to break the deadlock inside the opening five minutes when Jones picked out Rowe in the centre however his first-time effort was uncharacteristically tame and straight at goalkeeper James Montgomery.

Fylde should have had the opener that their lively start deserved moments later. Sam Finley sent Muldoon racing clean through on goal however the frontman had almost too much time and his indecisiveness proved costly as Montgomery claimed at his feet.

The goal duly arrived shortly after the quarter-hour mark. Muldoon fired in an inviting cross from the right that was parried by Montgomery straight into the path of Rowe who was more than happy to roll the ball into the open net.

Gateshead fired their first warning shot of the afternoon midway through the half when Ben Fox engineered himself space in the box however Jay Lynch was on hand to claw the winger’s fierce strike right out of the top corner.

The host’s pressure was starting to build as Fox was again denied by Lynch, this time seeing a header palmed around the post by the Fylde stopper.

Rowe doubled up with 37 minutes on the clock to put the Coasters firmly in control. The prolific forward was found in space to the left of the box and impressively beat his man before  lashing a low strike between Montgomery’s legs and into the far corner.

Wes York hit back with a real chance for the home side as half-time approached, however the stubborn Lynch refused to be beaten and smartly saved with his legs after the forward had found a way through.

The Coasters made an equally bright start to the second period and Montgomery was soon sent scampering across his goal line to keep out Muldoon’s long range drive.

Gateshead weren’t without chances of their own and Jordan Tunnicliffe had to be alert to divert Paddy McLaughlin’s strike around the post.

Richard Peniket could have pulled on back for the hosts on the hour when he was slipped through, however Lewis Montrose got a toe to the midfielder’s effort to nick it narrowly wide of the near post.

Fylde almost put the result to bed with 20 minutes to go when Tunnicliffe powered a header goalwards only to see the ball stopped dead on the line by Montgomery.

The visitors rarely got out of second gear against their lacklustre hosts but were almost made to pay for not putting the result out of sight when Lynch was forced into a sensational save at the near post to deny York.

Two substitutes combined as the final whistle approached with Jonny Smith playing a delightful ball across the face of goal that was inches out of James Hardy’s reach.

Gateshead nicked a consolation goal at the death when Peniket nodded home from close range with virtually the last action of the match.