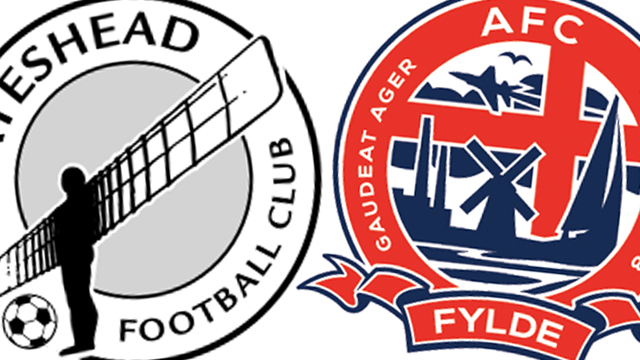 AFC Fylde were knocked out of the FA Trophy as a goal from Ryan Bowman sent National League side Gateshead into the quarter-finals.

In a game of few clear cut chances, Bowman scored the winner from close range after Rob Ramshaw’s cut-back was deflected into the striker’s path.

Fylde’s best chances came in the first half as both Dion Charles and Sam Finley forced saves from Gateshead goalkeeper Sam Russell but they could not break through against higher league opposition.

The Coasters made two changes from the midweek defeat at Chorley as Adam Sumner and Caspar Hughes replaced Josh Langley and Dom Collins.

Finley showed an early sign of intent for Fylde as he tried his luck inside fifteen seconds but his long range effort went harmlessly wide.

It took until the seventeenth minute for the first big chance of the match. Danny Rowe won possession from Paddy McLaughlin and Charles picked up the loose ball but his low strike was saved by Russell.

Gateshead then began to threaten and were almost gifted the opener. Caspar Hughes needlessly kept the ball in play only for CJ Hamilton to take the ball and burst into the Coasters’ box but Stephen Crainey was well positioned to clear the danger.

Fylde then should have taken the lead on 26 minutes. Sumner delivered a fierce free-kick into the Gateshead box and found the head of Tom Hannigan but the skipper’s close range header was straight at Russell.

As the game began to stretch, it was Gateshead’s turn to threaten with a header but Ramshaw’s effort floated high and wide of Matt Urwin’s goal. Fylde then went close as Charles’ pass split the Gateshead defence but Finley’s angled bobbling shot went inches past the post.

Finley connected much sweeter with his next effort but his low volley, following a Dele Alli-esque flick, was comfortably gathered by Russell at his near post as the first half drew to a close.

Within a minute of the second half, as in the first, Fylde sent a warning sign to the Gateshead defence. It was Danny Lloyd with a wild effort this time as he sent a volley flying wide whilst under pressure from the Tynesiders defence.

There was a brief moment of panic for the Coasters just before the hour mark. Hamilton’s cross-shot was fumbled by Urwin but Bowman was unable to turn in the rebound before Sumner eventually cleared the danger.

Gateshead then spurned a glorious chance to break the deadlock. Josh Gillies burst forward and crossed the ball to the unmarked Bowman but his first touch took him away from goal. Bowman’s shot on the turn from eight yards then flew wide of Urwin’s top left-hand corner.

The pressure was building from the hosts and they took the lead on 73 minutes. Ramshaw drove to the dead ball line and his cross was deflected straight to Bowman who finally got his goal as he swept in from close range.

There was almost an immediate reply from Fylde as Finley broke into the box but his low shot was agonisingly deflected onto the roof of the net by Gateshead half-time substitute James Curtis.

Gillies nearly added a second in stoppage time but his whipped effort was comfortably gathered by Urwin. Danny Rowe also sent a late effort well wide for the Coasters whose sole focus will now be on gaining promotion from the National League North this season.