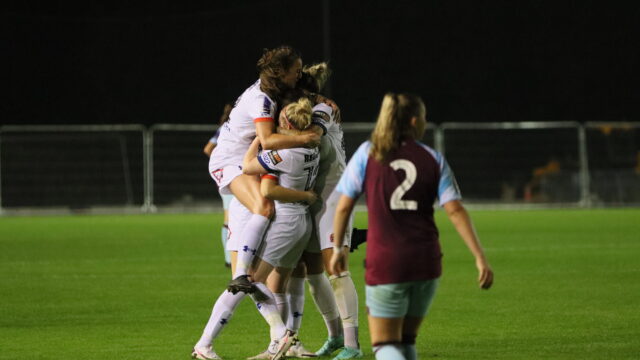 Mill Farm played host to the second home fixture of the new season for AFC Fylde Women, who sought to maintain their early momentum at the top of the FA Women’s National League.

The hosts welcomed Burnley Women for an exciting Lancashire derby on Wednesday evening and, as anticipated, it proved to be a hard-fought contest for both sides. Ultimately, it was The Coasters who came away with the local bragging rights, with Faye MCcoy and Amy Hughes on the score sheet.

A strong Burnley side had arguably the better of the opening period, beginning with a free-kick delivered to the far post by Nic Worthington that landed at the feet of Lizzy Hamer, who could only find the side netting. Hamer then saw a penalty appeal waved away when she nipped in to gather a stray pass back and collided with the onrushing Khiara Keating, but her appeals were waved away, much to the surprise of the Burnley bench. The visitors came close to levelling the game with a curled long range attempt from Worthington, whose lofted effort clipped the outside of the post.

Moments later, Burnley broke down the left and sought to thread a ball through to Evie Priestley, but Laura Merrin was on hand to avert the danger with a vital interception. A quarter of an hour into the game, Fylde gained more of a foothold in the contest with Sasha Rowe leading the line going forward. On Fylde’s right, the energetic Emily Hollinshead looked to create space for her teammates, providing a neat lay off for Jodie Redgrave to strike from the edge of the box, but Redgrave’s effort was blocked at close range. Faye McCoy then won a free-kick in a dangerous position 30 yards out and stepped up to drive the ball narrowly over the visitors’ crossbar.

In an end-to-end match, it was Fylde who broke the deadlock through McCoy, who headed in from close range to add to her tally after her hat-trick heroics at Stoke City last Sunday. McCoy rose high to head deftly into the bottom corner from a perfectly weighted cross from the right. It capped off a fine spell of attacking play by the hosts. A well-worked routine almost came to fruition minutes later as Rowe found McCoy again in the box, but McCoy’s header was saved by Burnley goalkeeper Lauren Bracewell just before half-time.

The visitors began the second half brightly and looked to find a way back into the contest. As the ball broke free in the box, Burnley striker Priestley capitalised on a bouncing ball and fired a shot towards goal, but Keating palmed it away with a fine reflex save.

Only moments after her introduction in the second half, Fylde’s Amy Hughes made an instant impact and slotted home with a measured left-footed strike to double Fylde’s advantage. Embraced by her delighted teammates, Hughes added a real spark to the Fylde attack and combined well with the equally impressive Jodie Redgrave in the final third. Redgrave hit a powerful left-footed drive from the edge of the box, but Bracewell gathered well in the Burnley goal.

In the latter stages, Burnley came close to reducing the deficit on a number of occasions, including long-distance strikes by the lively Shell Saunders and ever-present Nic Worthington in the middle of the park. The home side owed a great deal of gratitude to the excellent Keating in the Fylde goal, currently on loan from Manchester City, who commanded her box expertly. Whenever the Fylde defence was breached, Keating made a number of brave blocks to deny the Burnley forward line, spearheaded by their dangerous number nine Priestley.

At the end of a crisp summer’s evening, it was the ever-improving Fylde Women who earned all three points to maintain their position at the summit of the table in the early stages of the campaign. Next up, Fylde will hope to continue their fine form as they travel to the Black Country to face Wolverhampton Wanderers in another eagerly anticipated league fixture.