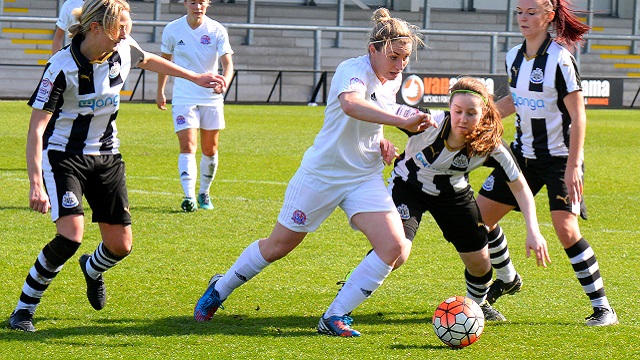 Fylde Ladies made it back-to-back victories at Mill Farm as they swept aside bottom club Newcastle United Women with a dominant display.

The Coasters saw off Nottingham Forest a fortnight ago in their eagerly-anticipated return to Mill Farm and three goals without reply handed Conrad Prendergast’s a league double over their hapless opponents.

Danielle Young’s early goal and a brace in the final moments from Charlotte Farrell, erased memories of last weekend’s disappointing away defeat at Derby County.

There were two changes to the starting line-up with Eve Kennerley replacing Laura Walker and goalkeeper Danielle Brown returned to the side in place of Alex Brooks.

After taking control from the off, the Coasters got the deserved opener after just ten minutes. Young made a great run into the box, and once found in space, made no mistake in poking the ball past Alice Harkness in the Magpies’ goal.

Kennerley should have doubled the lead midway through the half. Yasmine Swarbrick raced into the box and rather than cutting inside to shoot, she unselfishly squared for Kennerley who looked certain to score, but Harkness reacted well to save.

A few minutes later Newcastle tested the Brown for the first time – Jessica Ellison tried her luck from 30 yards with a powerful effort, but the keeper held well.

Shortly after the break, Young almost bagged her second of the afternoon. Substitute Leah Foster crossed for Young who was presented with a gaping goal, however she failed to get a real connection and fired wide.

Olivia Wilkes almost found the deserved second goal in the 64th minute when her great run down the left wing gave her time and space to let fly with an effort from distance however her sublime strike crashed against the post.

With just two minutes of normal time remaining the Coasters finally added a second from the penalty spot. A handball in the area gave Farrell the chance to get on the scoresheet and she made no mistake, slotting the ball into the bottom left corner.

And with the last kick of the game, Farrell doubled her tally. A goalmouth scramble following a corner saw Farrell fired home a loose ball to seal the points on a deserved victory.

The ladies team, who are back in action at Mill Farm on Sunday 14th May for their final home game of the season, are now up to third in the Women’s Premier League table.