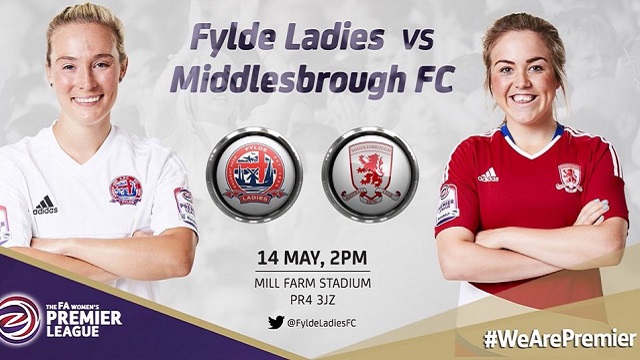 Fylde Ladies slipped to defeat in their final Premier League game of the season with a 3-0 home reverse against Middlesbrough Ladies.

Two first-half goals from Boro striker Bianca Owens did the damage before Ellie Dobson added a third after the break.

The hosts started brightly in the sunshine at Mill Farm and Leah Foster was a whisker from opening the scoring after just two minutes when she cut inside Jade Ridley and fired narrowly wide of the far post from eight yards.

Middlesbrough midfielder Jessica Havelock hit back with a chance for the visitors soon after when she let fly from 25 yards however goalkeeper Alex Brookes was equal to her powerful effort. Boro forward struck a side-footed attempt a foot wide moments later as the game opened up.

Yasmine Swarbrick whipped in a delightful cross from the right shortly after the 10-minute mark that found Foster but her first time strike was straight at Laura Wareham in the Middlesbrough goal.

Foster was causing havoc in the Boro box and forced another good save from Wareham when the ball fell kindly to her at the back post.

The league’s runners up took the lead a minute shy of the half hour when top scorer Bianca Owens let fly from 30 yards and Brookes could only watch on as her thunderbolt arrowed into the top corner.

Brookes made amends moments later when she clawed away Havelock’s header from point-blank to prevent the visitor’s doubling their lead.

Foster found herself clean through ten minutes before the break but took too long to get her shot away and her eventual left-footed attempt was easy for Wareham.

Fylde were knocking on the door and Eve Kennerly saw her long range strike tipped around the post. The midfielder went closer still seconds later when she flicked the ball over her marker inside the area before crashing a wicked volley against the bar.

The woodwork had barely stopped shaking when Hannah Forster’s first time shot rattled the bar yet again, cannoning down onto the line and away to safety.

However, against the run of play, Middlesbrough doubled their lead with the final action of the half. Owens held off her marker on the edge of the area before racing into the box and firing low into the opposite bottom corner.

Owens picked up where she left off after the interval, breaking away down the right and firing into the side-netting.

Danielle Young launched a shot from long range that sailed over the bar as the Coasters looked for a way back into the game.

The result was effectively put to bed in the 66th minute when Boro made it three. Ellie Dobson bundled through the Fylde backline and slotted the ball past Brookes into the far corner.

Foster was still looking the main goal threat for the Coasters and had another opportunity to pull one back when she evaded a couple of challenges before letting fly from the edge of the area, but it was straight at Wareham.

Emily Scarr tested Brookes with a couple of tame free-kicks in the closing stages whilst the Coasters failed to really threaten and end the Premier League season in seventh place.