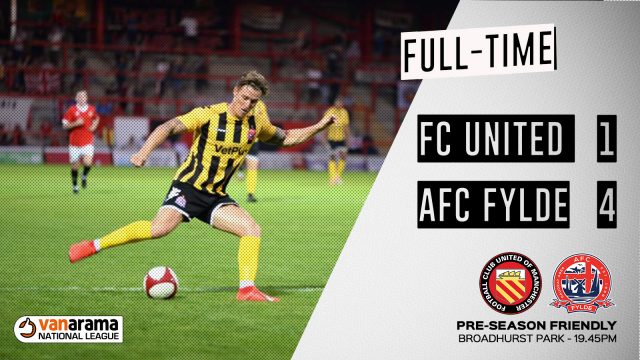 The Coasters recorded back-to-back pre-season victories, after a 4-1 win at Broadhurst Park saw them overturn FC United on a hot summer’s evening.

Fylde started on the front foot in Manchester, and it wasn’t long before they took the lead, courtesy of a Danny Rowe cracker.

Almost thirty yards from goal, Rowe was afforded too much space and, with minimum backlift, fired an unstoppable effort low into the bottom corner beyond the outstretched Wharton.

Willoughby himself had something to prove back at his old stomping ground, and was subject to a couple of heavy challenges.

He comfortably dusted himself down though to add Fylde’s second of the evening, firing an effort from distance which deflected past Wharton, and into the net.

With half-time looming, the Coasters soon effectively ended the game as a contest, as Mark Yeates pinpoint delivery found Dan Bradley in the penalty box.

Bradley neatly controlled, before slotting beyond Wharton from close range, extending the lead to three goals at the interval.

Kurt Willoughby, now with wind in his sails following his goal, very nearly doubled his tally for the night early in the second half.

Getting the wrong side of Potts with his blistering pace, Willoughby looked to lift the ball over the onrushing Wharton – and but for a fine reaction save from the keeper, was nearly successful.

The Coasters looked to finish off FC United, and the trio of Yeates, Rowe and Willoughby in particular looked most likely to make that happen.

As Luke Burke burst into the box and fizzed a searching ball across the face of goal both Bradley and Willoughby were there – but neither could react to turn it home.

With changes made by both sides, the game took somewhat of a downturn in intensity – but with this more gaps appeared.

One such moment was when Yeates was found on the right wing in acres of space, choosing to cut the ball across the penalty box to Kosylo, who was there to execute a simple left-footed finish.

It seemed as if this would be the final say on the matter, until in the dying moments an FC United corner was cleared to the edge of the box, and the feet of Carney.

Carney shimmied inside before unleashing a low effort into the bottom right corner of the goal, giving new goalkeeper Montgomery no chance.

It was the final moment of a game that the Coasters impressed with, and with their final pre-season game coming at Altrincham on Saturday, things appear to be ticking along nicely.