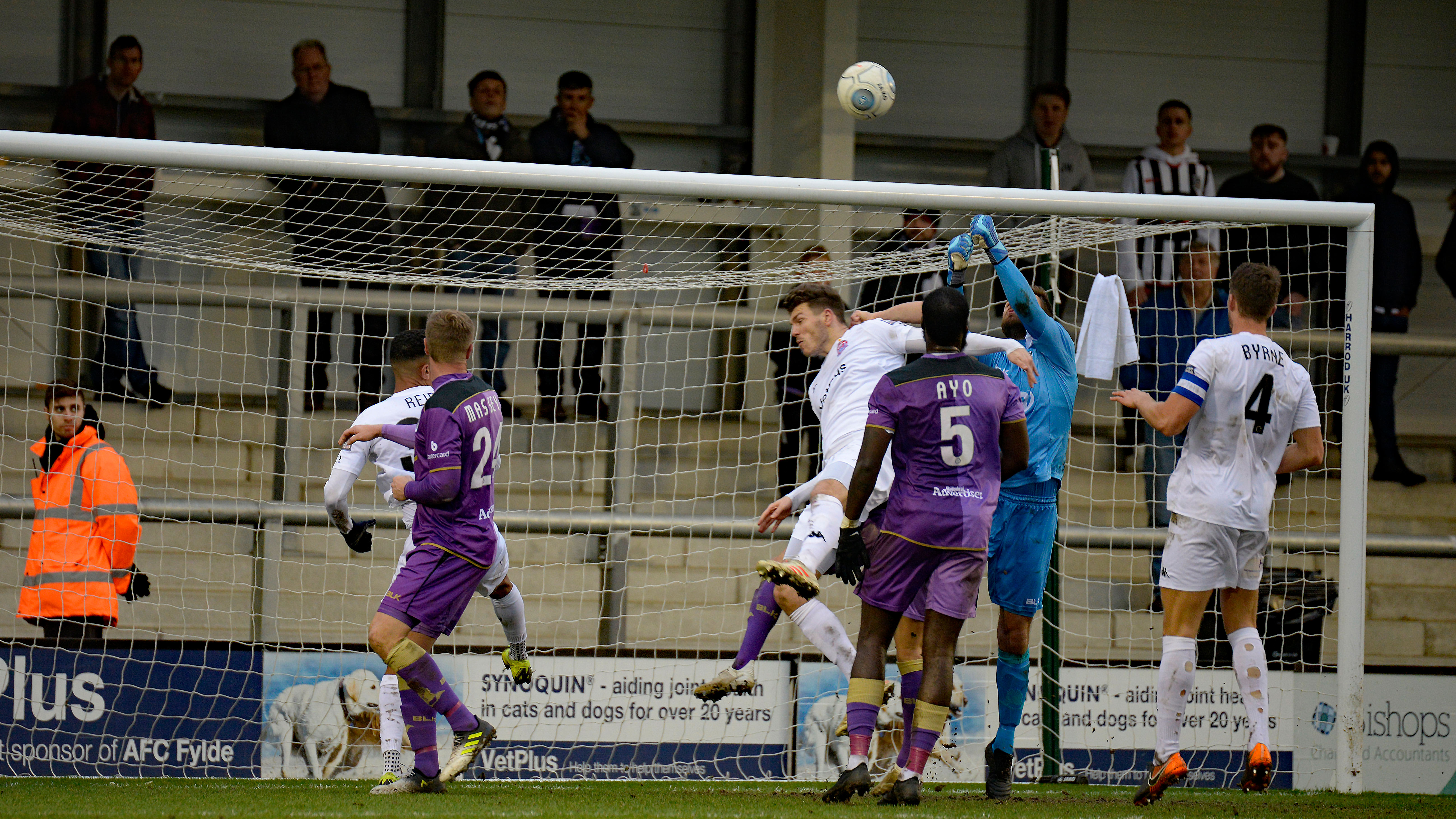 It was a second straight win in the National League for Fylde, on an afternoon where Rowe and Crawford earnt all three points.

It was a frantic start saw Maidenhead nearly take the lead, after Comley’s dangerous cross was guided back to Clifton, whose low effort was kept out smartly by Lynch.

The visitors made their early domination pay, as Ryan Upward caught a volley sweetly inside the box, and nestled it into the back of the net beyond Lynch, sending the Magpies ahead within ten minutes.

It was nearly instantly level, as Fylde’s first real move of the game saw Haughton and Francis-Angol combine, playing in Reid, but his powerful effort from close distance was deflected narrowly over.

Haughton threatened next, taking a wonderful first-time touch to take out two defenders, but his long-range effort wasn’t troubling Pentney in the Magpies’ goal.

The Coasters continued to fight back with Haughton central to everything for the Coasters, this time sending a dangerous cross to the back post – but Hemmings’ reaction was a little light, and his effort was smothered by Pentney.

Nombe provided a great outlet on the right for Maidenhead, with his pace causing repeated issues, forcing Byrne and Tunnicliffe into repeated clearances.

On the thirty minute mark however, AFC Fylde had finally restored parity, with no prizes for guessing the goalscorer.

Netting his 23rd league goal of the year, Danny Rowe made the most of an Alex Reid lay off, twisting and turning in the box, before firing it low, and beyond the outstretched Magpies goalkeeper.

A sense that the Coasters were in the driving seat followed, as spectacular footwork from Croasdale and Haughton saw the latter dance goalwards, before being fouled on the edge of the box, with Obieye being shown a yellow card as a result.

The powerful free-kick from Rowe thundered into the wall and behind, with the dangerous Haughton corner finally dealt with by the Magpies.

Alex Reid came close to putting the Coasters ahead, after meeting a corner at the front post – but his effort was painstakingly wide.

The second half began with the ball in the net, as Clerima’s cross found Clifton in plenty of space,- nodding home from 5 yards, only to be flagged for offside, fortunately for Fylde.

Whilst Clifton looked to be comfortably offside, it was a wake-up call that the in-form striker was lurking, and it did seem to sharpen up the Fylde defence.

The Coasters responded well, with a flowing passing move arriving at the feet of Francis-Angol, who struck the ball well, but Pentney denied him with a smart stop at his front post, turning it behind.

The inswinging corner was only cleared as far as Tom Crawford, who composed himself before rifling it home, and giving the Coasters the lead for the first time of the afternoon.

It was just rewards for another solid performance from Crawford, who had done well to solidify his place in the team, following good performances against Havant & Waterlooville, and Barnet.

Maidenhead responded well, with a host of set-pieces to test the home side. Comley’s delivery continued to cause problems, finding Kilgour on occasion, but Lynch took control on more than one occasion to quell the danger.

The Magpies used all three substitutions to try and effect the game and find an equaliser, but more space for the Fylde attack was the cost, as Rowe, Haughton and the latterly introduced Tasdemir looked to find a third on the break.

Tasdemir went close in the closing minutes, before the final chance of the game fell to the Magpie’s Josh Kelly, but he couldn’t wriggle free and find the net.

“It wasn’t pretty at times, and the conditions were difficult,” said manager Dave Challinor. “It was by no means a free-flowing performance.”

“We expected it to be tough, and the worst thing you can do in games like this is give them a goal first, which is what we did.”

“Second half we got the goal and saw the game out, but I wasn’t overly happy with how we did it, as we almost left it to chance, but we did manage to see it through.”