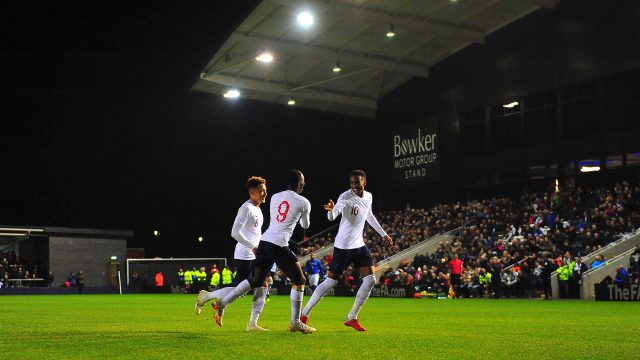 In the first-ever international match at Mill Farm England U20’s ran out 2-1 winners over Italy U20s.

The Young Lions dominated the first half as the impressive Arsenal striker Edward Nketiah put England ahead after 18 minutes with a brilliant finish beating Italian goalkeeper Michele Cerofolini.

20 minutes later there was another Arsenal man on the scoresheet as Joe Willock smashed a penalty into the bottom left corner. The Goalkeeper did manage to get a hand to the ball, but the power of the strike forced it into the corner.

England looked comfortable with their 2-0 lead as Bristol City defender and England captain Lloyd Kelly dealt with any Italian threat.

As the second half began the Azzurri had a bit more spring in their step as they went in search of a goal.

They waited until the 68th minute when left-back Alessandro Tripaldelli who is currently on loan at Eredivisie side PEC Zwolle put in a brilliant cross. The ball was met by Sassuolo midfielder Davide Fratessi who made no mistake in heading past Aaron Ramsdale.

As the game entered its closing stages the Italians pushed for an equaliser as a goalmouth scramble involving ten players was somehow cleared by the England defence.
The game finished 2-1 in what was a memorable night at Mill Farm.