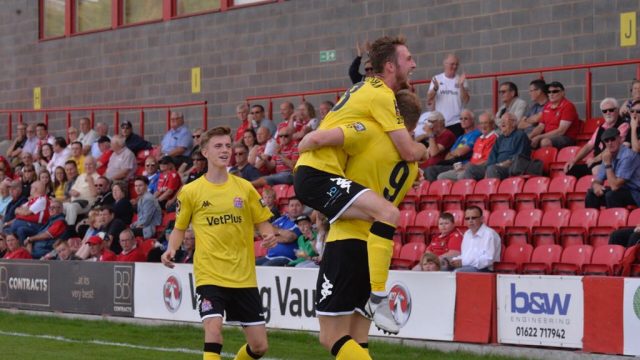 With two goals from the league’s top goal scorer Danny Rowe and a smart run and finish from substitute Toure, AFC Fylde continued their bright start to the 2018-19 season with a solid 3-1 win away at Ebbsfleet

Dave Challinor made two changes to the squad from the goalless draw at home to Harrogate on Bank holiday Monday with Hemmings making his first start and Brewitt making his first appearance on the bench after signing for Fylde on Thursday.

The game started with both teams pressing hard in midfield and within 3 minutes the referee was given no option but to show a yellow card to Croasdale for a late challenge on Ebbsfleet’s midfielder Adams.

As the game began to settle it was evident that Fylde were playing with the confidence of an unbeaten team and took just five minutes to create the first chance after some nice play by Rowe to feed Angol out wide who’s sharp cross was just cut out by Ebbsfleet’s keeper with Croasdale closing in.

Fylde clearly had the upper hand in the first 15 minutes with the trio in midfield of Kellermann, Hardy and Bond playing some confident one-touch passing. When in the 11th minute Hardy found himself clear on the wing to tee up Rowe near the corner of the Ebbsfleet box and Rowe’s first time shot just fizzed past the post with the keeper beaten.

It wasn’t until the 16th minute that Ebbsfleet applied any pressure on the Fylde back four, but time and again they came up against a superbly marshalled Fylde back line.

As the half wore on both sets of forwards were struggling to gain any advantage over the defences and the only trouble for either keeper was the occasional high or wide shot.

Then out of the blue in the 28th minute Fylde almost took the lead in the bizarrest of circumstance as Ebbsfleet’s King’s back pass from midfield was hit too hard and as goalkeeper Ashmore slipped, the ball was trickling into the net only for the keeper to get back to his feet and clear for a throw.

As half-time approached, with Ebbsfleet trying to gain the advantage, a Shields shot from the edge of the box was easily saved by Lynch, but often when in good positions the home team were guilty of over-hitting crosses or when a chance looked on a solid Fylde defensive wall kept the score at 0-0.

The start of the second half saw Fylde press further up the field in an attempt to unsettle the Ebbsfleet back line.

Then in the 49th minute, Fylde found themselves in the lead from a fortuitous miss-hit cross from Fylde’s main marksman Danny Rowe.

A Free kick was awarded to Fylde just inside the Ebbsfleet half, Hardy played it out wide left to Rowe and with Rowe turning Ebbsfleet defenders inside and out at the edge of the box the cross was drifted in but too high for any player to get a head on, then as the goalkeeper watched,  it nestled in the far corner 1-0 Fylde.

Within 60 seconds of the restart, Fylde almost found themselves two up as Bond chased down a loose ball between the Ebbsfleet central defenders but a last-ditch tackle stopped Bond getting a shot off.

Ebbsfleet settled themselves and could have found themselves level in the 54th minute but for a superb last-ditch tackle by Kane who stopped Weston getting a free shot away from 12 yards after the Fylde defence failed to deal with a long ball from the Ebbsfleet defence.

However, in the 57th minute, Fylde took a two-goal lead from a Danny Rowe free kick.

Rowe chasing down an Ebbsfleet defender forced him to play the ball out for a corner. Fylde played a short corner which found Croasdale free about 25 yards out in centre of the pitch, Croasdale powerful shot looked to be going in the bottom corner, only to be blocked illegally by the hand of Ebbsfleet captain Winfield. The referee had no choice but to show a yellow card, however, that wasn’t to be the only punishment for Ebbsfleet.

With the ball placed centrally 3 yards outside of the box it was clear only one player was going to take this, and with the goalkeeper guarding the left-hand post, he was almost daring Rowe to try to beat the wall into the right corner of the net. Not needing a second invitation Danny Rowe beat the wall and left the Ebbsfleet keeper standing watching as it sailed into the corner of the net. 2-0 Fylde.

With Ebbsfleet making two changes after Fylde’s second goal the game opened up in middle of the park with both teams attempting a few long-range efforts. In response to Ebbsfleet double change, Dave Challinor bought on Tunnicliffe for Hemmings to provide aerial support for the Fylde defence and Toure on for Hardy to provide some pace for counter-attack. However, in the 77th minute, Ebbsfleet halved the deficit.

With the home team pushing for a way back into the game Ebbsfleet’s sub, Whitely scored a possible goal of the month contender picking the ball up 25 yards out, he unleashed an unstoppable shot into the top corner of Lynch’s net. 2-1 Fylde

With less than 15 minutes left on the clock, Whitley’s goal gave the home team the impetus, with this in mind in Dave Challinor made his final substitution giving a first-team debut to defender Brewitt who was bought on for the tiring Kellermann.

With the home crowd sensing an equaliser a long ball out by the Fylde defence beat the Ebbsfleet offside trap and found Toure just inside the opposition half and with just the keeper to beat he showed no signs of nerves as he calmly slotted the ball into the far post, to wrap up the game 3-1 Fylde.