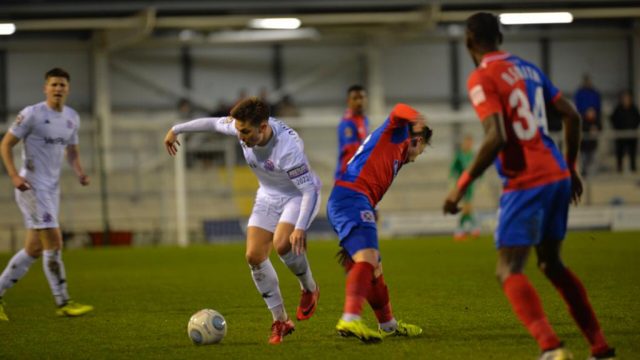 Despite levelling in the first-half through a Danny Rowe free-kick, the Coasters couldn’t kick on to find a way past Dagenham & Redbridge at Mill Farm.

The Coasters made one change from their draw at Aldershot Town, as Andy Bond was replaced by Dan Bradley, who’s missed out recently with a calf strain.

An open start to the game saw Dagenham & Redbridge look to play the ball in the air, whilst the Coasters tried to play their usual passing style.

The game’s first real chance came from a wonderful move, where Hardy and Haughton combined to find Bradley on the edge of the box.

Bradley shifted it out to Birch, who whipped a low ball across the face of goal, which Bradley directed goalwards – however, Justham was alert to deny Bradley his first Coasters goal of his second spell.

Fylde’s next sight of goal came as Dan Bradley slipped Danny Rowe through on goal, yet the flag on the far side indicated the National League top scorer had strayed offside.

Despite the early dominance, however, it was the Daggers who took an early lead, after a deflection caused bedlam for the Fylde back four.

Balanta found himself in a great position as the ball fell to him, and did well to put the ball beyond Lynch’s reach on his first attempt.

The Daggers responded with resolute defending, with a back five set up to frustrate the attempts of Fylde – Bradley letting fly with a volley from the edge of the box, but to no avail.

With many of the Daggers behind the ball, Fylde had their work cut out to try and get through the red and blue wall, Birch being found in space on many occasion – but his end ball was lacking on occasion.

After a long ball to Rowe was knocked down into Dan Bradley, his explosive run was halted after being bought down right on the edge of the box.

Having had a few free-kicks on Saturday which didn’t really trouble Aldershot, this one couldn’t have been more different.

He sized up the goal, and kept his low, powerful strike angled towards the bottom corner – beyond Justham, and equalising for the Coasters.

Whilst it was probably just reward for how the game had gone, the goal demonstrated how hard it had been for Fylde to get on the scoresheet, being restricted to a set-piece.

The Daggers came out of their shell in the beginning of the second half, with Balanta often the target.

The number ten did welt fashion a chance for his teammate Will Wright, playing him through wide of the penalty box – but his effort was saved well by Lynch.

A long ball back up the field saw Danny Rowe roll his marker, and in turn create a solid chance for Dan Bradley, but his effort went well over.

Hardy and Haughton were next to combine, as Hardy played it onto Haughton, but this time his effort deflected heavily behind for a corner, which itself was easily cleared.

After twenty minutes of the second half, both managers made their first changes, with Alex Reid replacing Francis-Angol in an attacking change, whilst goalscorer Balanta was replaced by Tomi Adeloye.

The Coasters responded well to the change, and Danny Rowe was focal to the attacking play, holding it up brilliantly before sliding in Dan Bradley, but his dangerous low cross was well cleared.

The next clear chance came as Rowe found Haughton advancing towards goal, but the attacker couldn’t wrap his foot around the ball enough, and it went wide of the post.

It looked destined to be another night of missed chances though, as great work from Haughton found Croasdale, who nudged it in front of Bradley – but he rushed his effort and his shot skewed over the bar.

Fylde were desperate for a slice of luck, and almost found it, as Haughton’s low effort was almost fumbled into the net by Dagenham keeper Justham, but the keeper manager to recover before it was too late.

Following a yellow card for bringing down Adeloye on the break, Neill Byrne was shown a second yellow card, accused of using an elbow.

Byrne, and the Fylde management team, looked beyond confused at the decision, given that the defender seemed to have been on the receiving end of the foul.

The game trundled to a disappointing close, with Fylde missing another opportunity to catch-up ground on those sides ahead of them.

“I’m disappointed with our performance, as we knew how they’d set up,” said manager David Challinor.

“They’d get people behind the ball and make it difficult for us, and the one thing you can’t do in that situation is give them a goal, which is what we did.”

“It then put people under undue pressure, as they defended what they had, which is credit to them as they did it well.”

“We didn’t move the ball quick enough, it wasn’t brave enough, it was like a testimonial at times, and in the second half we didn’t have the quality or composure.”