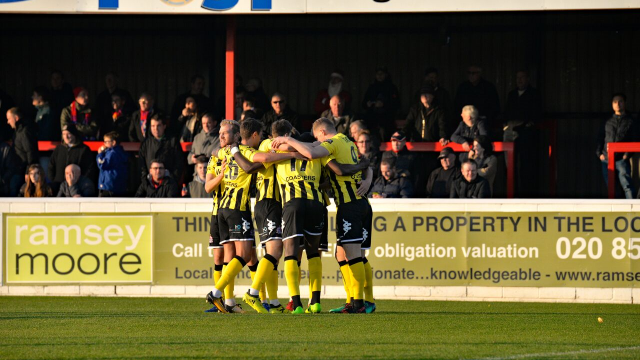 AFC Fylde fell to only their third league defeat of the season and a first away from home after a 2-1 defeat to Dagenham & Redbridge at the Chigwell Community Stadium.

Despite dominating most of the game and taking the lead after 30 seconds through Andy Bond the Coasters were beaten by strikes from Connor Wilkinson and Jack Munns either side of the break.

Dave Challinor made two changes to the side beaten by Leyton Orient a fortnight ago. Danny Williams made his first start for the club replacing Zaine Francis Angol who was away on international duty with Antigua & Barbuda.The other change saw Gime Toure replace Serhat Tasdemir on the wing.

The Coasters could not have had a better start. A long ball over the top found Toure who beat his marker for pace before pulling the ball back for Rowe to shoot. Rowe’s effort was saved but landed at the feet of Andy Bond who tucked the ball home from eight yards.

The chances kept coming for Fylde who were looking to build on their last away outing at Maidenhead United. Gime Toure had a curling effort from range superbly saved by Dagenham keeper Elliott Justham who denied Andy Bond a couple of minutes later parrying away a shot destined for the top left corner.

Toure and Rowe had chances down the left but a key turning point was the forced early substitution of Bond. The experienced midfielder clutched his thigh and signalled for the physio, clearly in some discomfort, and he was duly taken off and replaced by Jim Kellermann.

Just before the half-hour mark, the hosts were level against the run of play. A throw-in from the right found Connor Wilkinson who turned past Neill Byrne and fired the ball into the bottom right corner from the edge of the boxout of reach of Coasters stopper Jay Lynch.

The rest of the first half was fairly quiet. Jordan Tunnicliffe’s header from a Haughton free-kick looped onto the roof of the net whilst Rowe tried his luck again with a shot from an acute angle down the left.

Fylde started the second half brightly and were inches away from regaining the lead. A perfectly weighted cross from the right from Luke Burke was met by Rowe who saw his glancing header fall just wide of the far left post.

Four minutes later another Burke delivery found Houghton and then Rowe but neither could get their shot away quick enough and the ball eventually fell to Kellermann but hit his shot into the ground and the ball bounced up and over the bar.

With 25 minutes to go the Daggers took the lead. An excellent through ball to Chike Kandi down the right wing led to the youngster’s low cross being fired home by loanee Jack Munns giving Lynch little chance.

The Coasters almost responded quickly as Haughton turn and quick change of pace gave him room on the edge of the box and is powerful effort clipped the outside of the post at the top left corner.

Ashley Hemmings replaced Danny Williams with 20 minutes to go and the winger looked to impress with some silky skills down the left side.

Lynch was called into action to deny a low shot from Phipps from distance before his opposite number Justham once again produced magic in the Dagenham goal. A low effort from Haughton was deflected and wrong-footed Justham but some lightning quick reactions saw him punched the ball away only as far as Gime Toure who then saw his low shot blocked again.

Dagenham almost sealed the win late on as Kandi was found in space on the left. Lynch came out to narrowly the angle but the Dagenham forward instead played the ball to Robinson who saw his shot blocked off the line by Neill Byrne.

Justham would deny the Coasters with one last brilliant save. Another delivery from Burke was this time met by Toure whose powerful header was tipped over the bar for a corner.

The was the last chance for either side and the final whistle signalled back to back defeats for the Coasters for the first time this season. Fylde remain sixth in the National League and are back in action on Saturday afternoon as they welcome Boreham Wood to Mill Farm.