Jim Bentley had to make do with a point in his first game at Mill Farm, as AFC Fylde and Dover Athletic played out a goalless draw.

“We’ve kept a clean sheet which is pleasing, and on another day we could have won it, as we’ve had the better chances,” said Fylde boss Jim Bentley.

“Ultimately we lacked that bit of quality in the final third, they troubled us defensively as a big strong physical side, but another clean sheet is an improvement on the defensive record.”

The Coasters started brightly, and could have had an early lead as Danny Rowe’s header looped just beyond the post.

After a Danny Rowe free-kick that was well held by Mersin, AFC Fylde had an opportunity handed to them which could have been decisive.

A defensive blunder offered Jordan Williams the chance to break the deadlock after a mistake in the Dover defence, leaving Fylde’s top goalscorer one-on-one with Whites’ keeper Yusuf Mersin.

Williams had plenty of time to pick his spot, but ended up going for the near post, where Mersin was more than equal to him, saving the blushes of his defence. 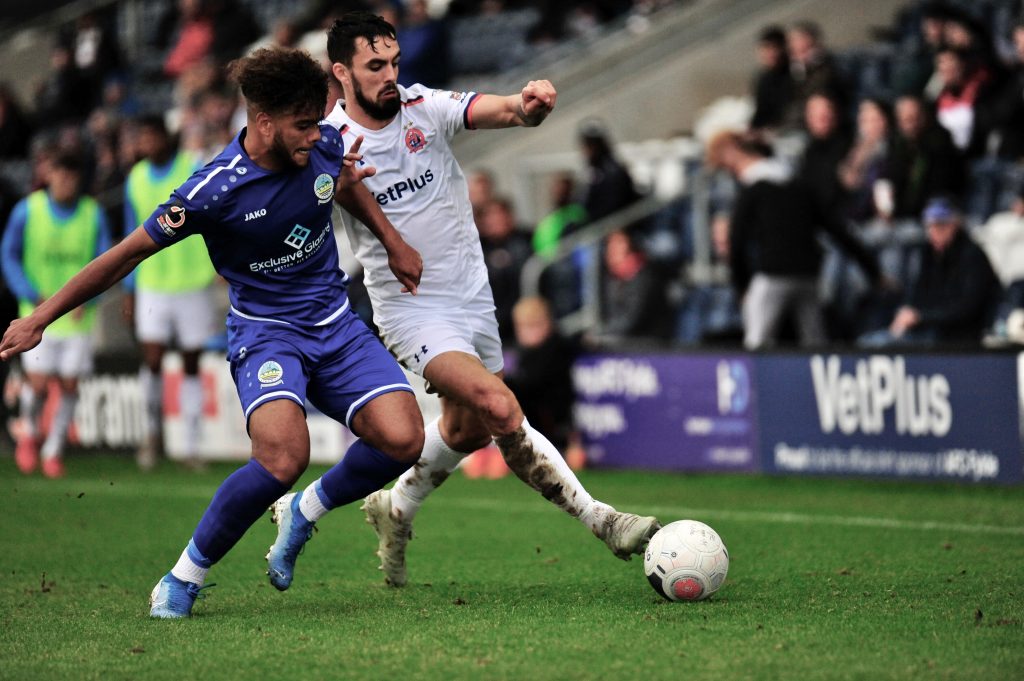 The second half was a similar affair, with Matty Kosylo opening up space in the box for himself, before taking a left footed effort that struck the side netting.

Shortly after, the Coasters thought they had taken the lead, when a deep cross to Danny Rowe was placed in the path of Croasdale, but the midfielder couldn’t bundle it over the line.

This was a wake-up call for the visitors, who shortly after produced their best chance of the game through striker Inih Effiong.

After being found in space, Effiong fired a powerful effort which looked destined for the top right-hand corner, only to be denied in wonderful style by James Montgomery, with a fantastic left-handed save.

Dover’s record on the road has been superb this season, with six wins from eight before today’s game – the highest points per game tally of any side away from home.

The Whites therefore continued to look for a goal on the break through the menacing Effiong, whilst the Coasters hoped talisman Danny Rowe would come up with some magic.

After striking a free-kick into the wall, Rowe was played through by Luke Burke, but he got his lobbed effort wrong, sending it over the bar.

“The lads defended well as a team, and I think the focus and discipline was good, but there’s certainly room for improvement,” mused Bentley.

“We start from the bottom and move forward.”

To catch up with the reaction of Jim Bentley, click here.

To catch up with Matty Kosylo’s reaction, click here.