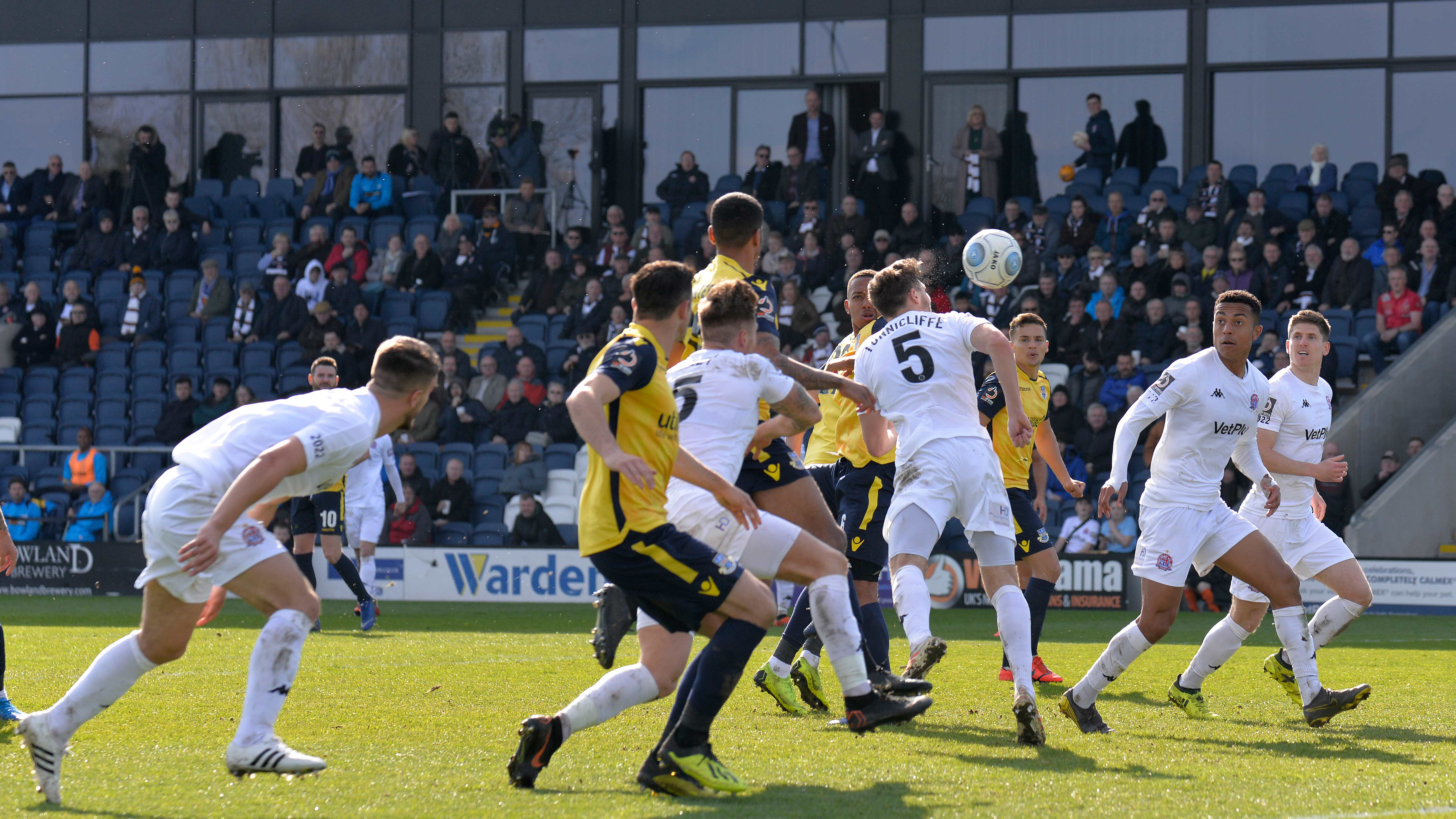 AFC Fylde came back from two down to record an emphatic 4-2 win at Mill Farm in the Vanarama National League.

Second half goals from Tunnicliffe, Haughton and Reid ensured the win, but it wasn’t always smooth sailing.

The first sight of goal fell to the Spitfires, as the ball set-up nicely following the clearance of Green’s long throw, but Yeates sent his volley over the bar on the first time of asking.

The Coasters went up the other end and had a fantastic chance to take the lead, as Haughton sent an inswinging corner into the box, which was well met by Tunnicliffe.

However, the Eastleigh keeper Southwood managed to hold the header, and deny the defender his third goal of the season.

This set a precedent for an open game, as Reid and Rowe looked to stretch the Eastleigh back four with runs in behind, whilst Eastleigh also threatened.

Green was enjoying his time down the left-hand side, and placed the ball perfectly for Yeates, who saw his effort turned behind by Lynch.

Whereas the midweek game against Dagenham and Redbridge saw chances hard to come by, the Coasters were in a much more creative mood, despite trailing.

Dan Bradley had perhaps his best chance yet to open the scoring, as Zaine Francis-Angol found him free in the box.

But Bradley’s header was low into the floor, and eventually scooped away, however, the blushes were lessened somewhat by the flag on the far side.

Despite these encouraging signs, it was the visitors who struck once again.

Again on the left-hand side, Green battled with Luke Burke for the ball, winning it, and sending it curling into the penalty area.

It was met in some fashion by Paul McCallum, who diverted Eastleigh’s second goal, and the second header, of the day, beyond Jay Lynch.

If Eastleigh thought that they’d to have the monopoly on headed goals though, they were mistaken, as it was the Coasters turn to pose the next threat in the air.

A fantastic corner was sent in by Nick Haughton and, determined not to miss another chance, Dan Bradley rose highest to glance a header beyond Southwood, and bring the Coasters back into the game.

It was Eastleigh again however, who had the next sight of goal, as Jay Lynch put himself centre stage for all of the wrong reasons.

Eastleigh continued to cause problems with crosses into the box – this time a long looping ball almost fell to McCallum, only for him to be pushed quite clearly in the back by Lynch.

Although soft, the goalkeeper gave the referee little option but to point to the spot, much to the frustration of Mill Farm, having seen Fylde fight their way back into the game.

The confident McCallum stepped up and, having already scored, looked to make it a very good afternoon for himself and indeed Eastleigh.

However, having created the situation, Jay Lynch was on hand to redeem himself – diving quickly to his left to push away the penalty, keeping the Coasters in with a chance.

Fylde, no doubt, started the better of the two sides, with Alex Reid failing to make the most of a couple of half-chances.

Haughton, who had drifted in and out of the game on the left-hand side, won himself a free-kick 35 yards from goal, which he stood up to deliver into a crowded penalty box.

After being denied by Southwood early in the first-half, Jordan Tunnicliffe was there to meet Haughton’s delivery this time, sending a header into the ground and bouncing into the net.

Having restored parity, the outlook was a positive one for the Coasters – however, this was quickly bought back down to earth, as Tom Brewitt went down for the second time in the game with an injury.

With Neill Byrne already missing out through injury, the choices were sparse, with the result meaning Arlen Birch came on at right-back, with Luke Burke joining Tunnicliffe at centre-back.

It was Fylde who continued to dominate though, with Rowe and Haughton both finding space around the 18-yard box, testing Southwood on occasion, who didn’t look all too comfortable.

Eastleigh themselves continued to cause issues, with Josh Hare sending a fantastic cross towards McCallum, who forced a fantastic low stop from Jay Lynch.

They continued to force chances through impressive wide play, with Hare taking up Green’s mantle from the first half – and causing Fylde issues from full-back.

Having set up two goals himself, it was time for Nick Haughton to get himself amongst the goals and complete the turnaround.

After shifting back onto his left foot 20 yards from goal, Haughton was invited to shoot, and did so, sending a low angled effort, which Southwood couldn’t keep out.

The game could have been out of sight shortly after, as a quick counter saw Nick Haughton with Alex Reid and Croasdale in support, with the goal gaping.

However the cross was just in-between the supporting players, and neither Reid nor Croasdale could make the most of the chance.

Alex Reid didn’t have to wait long for his next chance though, and this time, he put the game beyond doubt.

A well-measured flick on from strike partner Danny Rowe set Reid on his way, taking a touch goalwards, before slamming the ball into the roof of the net from the edge of the box.

It was the fourth goal without reply for the Coasters, who had been staring down the barrel of four league games without a win before the turnaround.

Eastleigh had chances to bring it back, with Zebroski and McCallum still causing problems in the air, whilst Matthews had a spectacular effort bounce back off the woodwork, but the win was all but assured for Fylde.

“It was a massive massive win, and I think we showed huge amounts fo character today and a fully deserved three points,” said Manager Dave Challinor.

“They were cheap goals to concede, as we knew they’d be a threat from set pieces, but the manner of the goals, two free headers is disappointing.”

“But we got ourselves a goal, back in it and from that point on we controlled the game a lot better.”