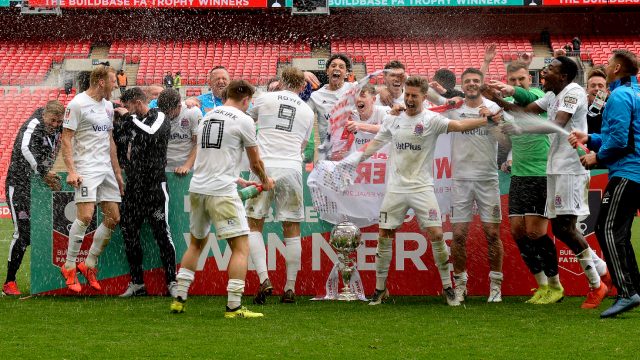 Danny Rowe’s second-half free-kick was enough for AFC Fylde to win against recently promoted Leyton Orient, and to lift the FA Trophy.

Dave Challinor adapted his Fylde side in a bid to counteract the back five that Orient had so much success with this season.

This meant the Coasters also lined up with a back 5, with Zaine Francis-Angol slotting in as the left-sided centre back, whilst Andy Bond and Arlen Birch deputised as wingbacks.

Whilst Orient started the game with the upper hand, six minutes in saw a nasty clash of heads between Josh Coulson and Neill Byrne.

The Fylde skipper was down for a prolonged period of time whilst he received treatment from the medical team, and after getting back on his feet, a discussion ensued pitch side regarding whether he could play on.

The ruling was an unfortunate one for Byrne as he wasn’t allowed to take any further part in the game, and was replaced by Tom Brewitt.

The Coasters grew into the game though in spite of this, and a string of chances almost saw them take the lead.

After Brewitt’s cross was turned over the bar by Bond, Haughton next tried his luck, swivelling before sending a shot crashing into the side netting.

This encouraged Fylde though, and Alex Reid was next to try his luck, sending a first time effort goalwards – which was tipped behind by Brill.

The remainder of the half saw the Coasters look to patiently undo Orient, with neat passing opening up space on occasion.

Orient, however, were still demonstrating the prowess that had won them their league title, with Koroma and Bonne both offering reminders of the firepower at their disposal.

However, all the duo could really offer were strikes from distance – none of which troubling Jay Lynch in goal.

Golden opportunities came Fylde’s way before the interval through more intricate build-up play – this time Rowe’s cross-shot was turned over the bar from close by Andy Bond. 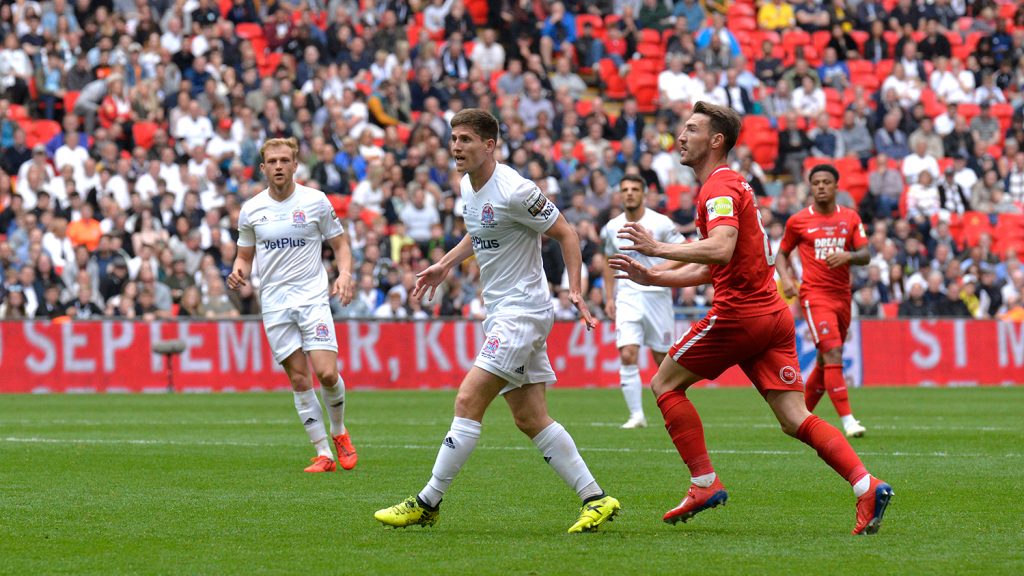 Although picking up from where they left off initially, Fylde almost found themselves behind at the hands of half-time substitute Jordan Maguire-Drew.

After McAnuff was bought down by Haughton, Maguire-Drew stood up to take it, before sending it past a motionless Jay Lynch, and crashing off of the post.

The rebound was cleared for a corner, this time Maguire-Drew turned provider, picking out a towering James Brophy, who steered his header over the bar from less than 6 yards.

This initiated Orient’s spell of dominance, and in their next attack, they struck the woodwork again, this time Marvin Ekpiteta.

Despite having plenty of the ball in open play, it was a set-piece that gave Fylde the breakthrough. And who else but Danny Rowe to step-up and create history.

Rowe sent the travelling Fylde fans into raptures, bending his free-kick over the wall, and past Dean Brill into the Orient net.

It had been more than Fylde had deserved for their endeavours in the game, and with it, memories of last weekend’s defeat started to wash away.

Leyton Orient, on the other hand, had the growing feeling that it wasn’t to be their day – perhaps best typified on 70 minutes, when Widdowson’s low strike struck the post, before the rebound was struck back into an O’s player, and behind.

Chances fell for Harold and Koroma, as well as the quiet Macauley Bonne, however, Lynch wasn’t really worked in the Fylde goal.

The 5,000 travelling AFC Fylde fans watched on as their side edged out the encounter, and in the process became the first team to win both the FA Vase and FA Trophy.