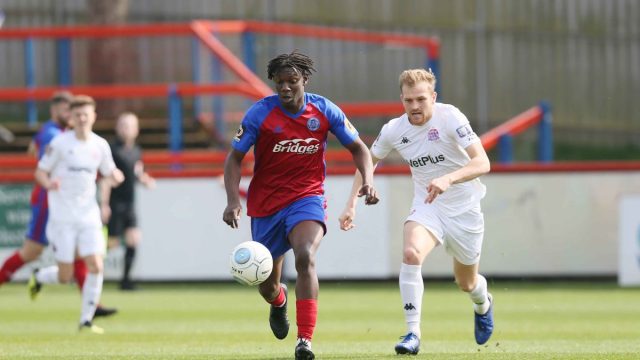 AFC Fylde’s bid for the title now seems to be beyond reach, after a goalless draw played out at the EBB Stadium against Aldershot Town.

The BT Sport cameras were in town for the top-versus-bottom end clash, but ultimately there wasn’t too much to write home about, as neither team could break the deadlock.

The Coasters reverted to a more familiar 433 formation following an experimental 343 at Leyton Orient midweek, with Haughton and Bond replacing Reid and Walters.

The Shots made three changes following their defeat to Barnet in midweek, with McCoy, McClure and Gallagher in for McDonnell, Bernard and Berkeley-Agyepong.

The Coasters started the better of the two sides, Francis-Angol’s burst down the left indicative of the space he would receive time and again in the first-half.

He was hauled down by McCoy in the fourth minute, with Danny Rowe stepping up to take the free-kick, but sending it dipping over the bar on this occasion.

Fylde’s next chance was arguably the best chance of the game, and one that will be looked back upon.

Danny Rowe sent a cross-field ball to Nick Haughton, who managed to side foot it into the path of James Hardy – however the forward, with all the goal at his mercy, managed to fire at the goalkeeper from point-blank range.

The busiest goalkeeper, and indeed the home side’s man of the match, was The Shots’ Mannion, who denied Bond and Haughton in quick succession from distance.

There were early signs that Fylde would cause some trouble for the Shots back four.

No more so than when Rowe, Haughton and Croasdale combined, the latter curling a low effort goalwards before the interval, met once again by the outstretched Mannion.

Despite holding possession well, the Shots looked very comfortable on the ball, and counterattacked smartly down the right-hand side with the pacy McCoy.

The final chance before half-time came from Nick Haughton however, who had driven at goal in his dazzling fashion, before powering a long-range effort goalwards, only for it to be tipped narrowly over.

The second half saw much of the same, however this time it was the Shots who started with more purpose.

Their best chance of the game came when Gallagher was slid in by Rendell, only for his low effort to be cleared off of the line by Philliskirk, when it seemed certain to be a goal.

A lot of the Coasters best chance in the second interval came from set-pieces; Tunnicliffe going close with a header at the back post, before Danny Rowe fired two free-kicks in good positions just wide of the goal.

Aldershot Town offered just as much as Fylde in the second half, with veteran Rendell putting himself about in an assertive manner, whilst Gallagher went close on a couple of occasions.

This eventually prompted three substitutions throughout the game, as Alex Reid, Lewis Walters and Ash Hemmings were all introduced on separate occasions.

The trio looked to affect the game, Reid heading over from a corner, before Hemmings late drive was sent crashing into the net, but it wasn’t to be a particularly memorable afternoon for Fylde.

“There’s disappointment and frustration as we’ve done more than enough to come away with three points,” reflected Manager Dave Challinor.

“If we weren’t creating anything then not scoring would be a concern, but people need to take responsibility – you have to score in certain situations.”