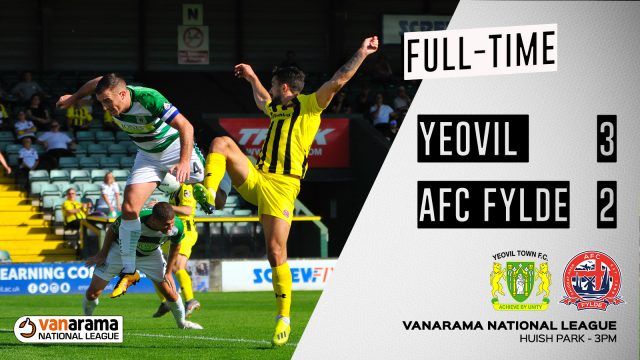 Despite a valiant second half display, two early Yeovil Town goals were enough to condemn the Coasters to a second straight defeat on the road.

AFC Fylde were without captain Lewis Montrose who is yet to return from injury, whilst recent signing Tyler Forbes did not receive his international clearance in time.

The in-form home side started the stronger of the two sides, and it took just five minutes for them to take the lead, after Ryan Croasdale’s foul on Murphy on the edge of the box.

Murphy was one of three Yeovil Town players around the free-kick and, having had the ball played off to him, struck a powerful right-footed effort that flew through the wall and into the net.

The Glovers remained in the driving seat, Murphy threatened on a couple of more occasions before the second goal eventually came.

A deflected shot landed in the path of Matthew Worthington to the right of the penalty box – who composed himself before laying it into the path of Hippolite, who made no mistake – firing low past Montgomery from ten yards.

Yeovil kept their momentum, and just seven minutes later saw Wilkinson’s towering header cleared off the line, before Murphy later had an effort ruled out for offside – giving Fylde chance the chance to breathe and take stock.

The Coasters grew into the game after the half-hour mark, with Rowe and Williams combining – but the Fylde number nine was snatching at chances.

Williams, who had three goals in two coming into the game, was working hard leading the line – but when a Yeates cross fell to him unmarked in the box, he fired over.

Before the interval, after Danny Rowe’s long range free-kick was blocked by the wall, Danny Philliskirk had the ball in the net – but he was flagged for what looked to be a clear offside.

At the break, the Coasters made a double substitution – with Willoughby and Whitmore replacing Craigen and Haughton.

This also saw the Coasters move into a defensive back five, with Whitmore joining Byrne and Jameson at the heart of defence.

The change worked for Fylde and, having yet to score for the Coasters, Kurt Willoughby found himself halving the deficit.

After having a similar opportunity go begging earlier in the half, Willoughby wasn’t making that mistake twice – and pounced to prod home Kyle Jameson’s flick on from 6 yards.

With the pressure now on, the Coasters looked likely to score the next goal, with Willoughby and Williams working tirelessly for chances.

The moment appeared to have arrived as Scott Duxbury unleashed a fierce right-footed shot – but his goal bound effort was turned onto the post brilliantly by O’Brien, and denied the equaliser.

This proved to be a pivotal moment in the game however, and the Coasters were made to pay shortly after.

Having been introduced in the second half, Yeovil substitute Jimmy Smith scored what proved to be the decisive goal – capitalising on Dan Bradley’s mistake to fire the Glovers’ third goal beyond Montgomery.

This prompted the opportunity for The Glovers to run down the clock when they could looking to see out the result – however the Coasters still threatened.

Fylde gave themselves a fighting chance once again when a fabulous cross from Kyle Jameson across the face of goal picked out Willoughby, who was there to dispatch his second goal.

With five minutes of added time, the hopes of an equaliser slowly began to fade, and despite the corners and long throws in the dying moments, the Coasters couldn’t find that all important equaliser.