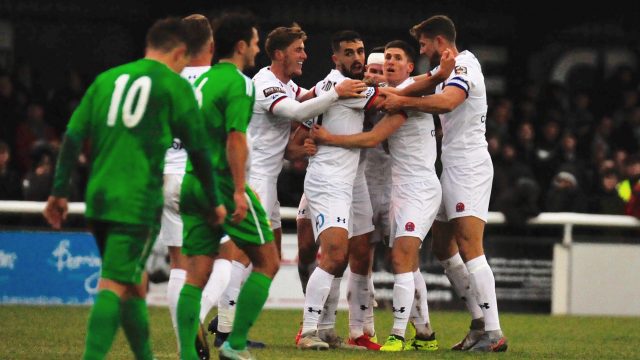 AFC Fylde ran out winners against Nantwich Town in the FA Cup first-round thanks to a somewhat fortunate Ryan Croasdale goal on the stroke of half-time.

Despite a spirited performance from The Dabbers, they couldn’t quite find a way to prevent the Coasters progressing into the second round.

The game started off a typical cup affair – with the hosts roared on by a bumper home crowd at the Weaver Stadium.

Danny Rowe tried to get things going for the Coasters, twisting and turning his way into the area, but his ball across six yard-box was dealt with by Nantwich.

The Coasters next won a free-kick 30 yards from goal, which Rowe took himself – hammering towards goal and forcing Gregory Hall into an unassured save.

The game started to open up a little. Danny Rowe drove into the box and zipped a cross into the area, but the ball evaded everyone, and the danger was clear.

A quiet spell in the game was followed by Rowe trying to get the first goal for the Coasters. He fizzed a shot from 30 yards-out which went just wide of the post.

The Dabbers then won a free-kick after former Coasters’ player Sean Cooke was brought down by Danny Philliskirk.

Cooke took the set-piece, only for it to be blocked by the wall, from which the Coasters broke.

Jordan Williams went on a bursting run down the left where he had Matty Kosylo and Ryan Croasdale waiting on the right, with the ball falling to the latter.

Croasdale attempted a first time finish, and on first look, got it all wrong, as his shot skewed off of him and high into the air, looking as if it would spin wide.

Ironic jeers from the home crowd were quickly silenced, as the ball dropped down onto the goal line, and bounced in off the post.

The Coasters number eight was mobbed by his teammates for his inadvertent finish, and gave Fylde a well deserved lead on the balance of play.

The first chance of the second-half fell to Cooke, hitting a shot from range which veered just right of Dan Lavercombe’s post.

As the game continued, Nantwich’s sense of urgency grew with it – knowing they needed at least one goal, or their FA Cup journey was over.

Ben Harrison went on a surging run from centre half all the way into the Coasters box, before losing control of the ball and falling to the ground.

The referee waved play on, despite some animated cries for a penalty both in the crowd, and on the pitch.

The Coasters made changes in a bid to stretch the game, with creative midfielders Nick Haughton and Mark Yeates joining the fray.

It very nearly paid off, as Mark Yeates was able to pick Neil Byrne out in the box, with the centre-half controlling it well, before slamming it home – however the offside flag was up on the near side.

The game opened up in the latter stages, and The Dabbers enjoyed their best spell of possession. The ball fell to striker Malkin in the area, but he couldn’t set himself, and fired the ball well over the bar, much to his dismay.

Striker Clayton McDonald joined the Nantwich attack from the bench, and bought a strong physical presence to their front line in the dying embers of the game.

Nantwich mounted one last attack and won a corner. It was kitchen sink time, as even the keeper Hall was up – but there was to be no fairytale finish.

The Coasters cleared the corner and Mark Yeates had an open goal to aim at before being fouled, which was the referee’s cue to bring the game to an end.

For only the second time, AFC Fylde are in the Second Round of The FA Cup – with the draw taking place Monday evening, after 7pm.