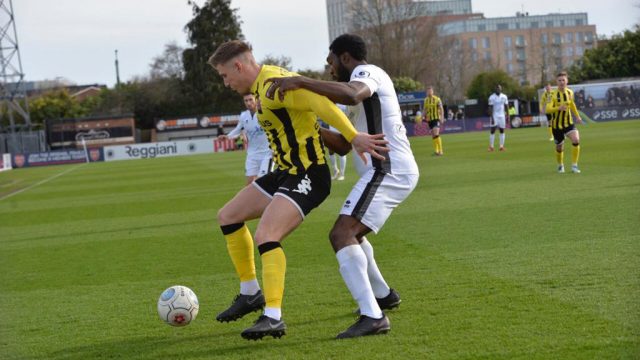 AFC Fylde left Hertfordshire disappointed with just one point, on an afternoon where The Wood fought back to rescue a point.

The Coasters made two changes to the team that faced Maidenhead, with Andy Bond and Dan Bradley returning to the side in place of Ash Hemmings and Alex Reid.

Boreham Wood were forced into one change, as Gabriel missed out through injury, replaced by Bradley Ash.

Some nice early passing saw Tom Crawford getting himself on the ball a lot, with Bradley and Haughton making themselves options on either wing.

Boreham Wood had the first sight of goal on the afternoon, as a long ball deceived Byrne, and Bradley Ash got himself goal side, before dragging a deflected shot narrowly wide.

The corner was swung in towards a packed penalty area and met by a towering Fyfield, however, his header angled just wide of the post, much to the Coasters’ relief.

Fifteen minutes in and the Coasters started to find their rhythm, with Crawford and Haughton combining skilfully, before Haughton unleashed a stinging effort at goal which was just turned over by Huddart.

Although the resulting corner routine wasn’t a well worked one, it did see the Coasters open the scoring.

Crawford dragged a shot across the face of goal from the edge of the box, and Neill Byrne latched onto it, making no mistake from close range.

Boreham Wood looked to respond instantly, with Bradley Ash the most likely to make things happen, but Fylde continued to find space, with Haughton trying his luck from distance once again.

Murtargh was next to try and find the leveller, with a dipping shot from 20 yards that moved in the air, forcing Jay Lynch into a smart improvised stop, palming it away with his right hand despite leading with his left.

The Coasters, however, stayed in the driving seat, with Rowe almost doubling the lead after a short corner routine fell to his feet – but his first-time effort edged narrowly past the post.

A quick free-kick from The Wood played in the lively Shaibu, but his effort was blocked marvellously by Neill Byrne, who had enjoyed a good first half alongside his defensive partner Tunnicliffe, keeping their side ahead with important clearances. 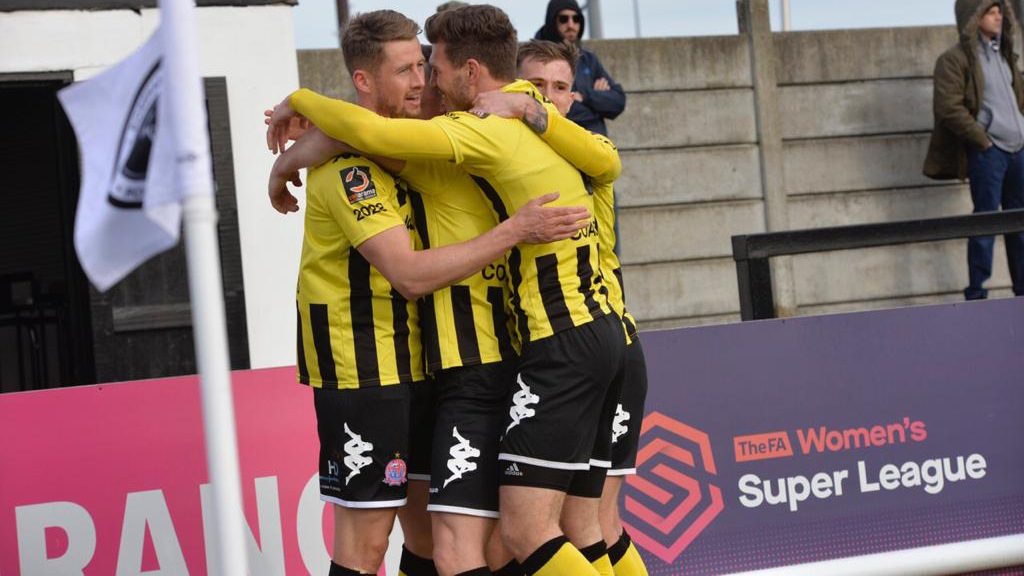 It was almost a dream start for the Coasters after Haughton weaved his way into the box and was clumsily chopped to the floor – but the referee Sam Purkiss decided against awarding a penalty kick.

However they couldn’t make it pay, and after Danny Rowe was caught in possession, Shaibu was played through on goal, and judged by the referee to have been illegally brought down by Ryan Croasdale.

It was probably fair rewards for The Wood’s efforts, with Bradley Ash the man responsible for levelling from the spot.

The penalty was sent low and hard to the left with Coasters keeper Jay Lynch guessing right, palming it away brilliantly – however, the onrushing Jamal Fyfield made the most of the rebound, powering it home, and restoring parity.

The Coasters looked a little shaken, as tempers began to flare, however eventually they settled, with Tom Crawford providing some much-needed composure in the middle.

A long ball found Andy Bond on the edge of the area, who took a wonderful touch before playing in Haughton, with the forward poking it goalwards – nearly catching out Huddart.

Alex Reid and Serhat Tasdemir were introduced to try and stretch the game, but Boreham Wood restricted their involvement through effective man-marking.

With five minutes to go, a poor touch from Tunnicliffe in the box almost allowed Shaibu the chance to win the game, but his effort was well blocked behind for a corner.

The game drew to its conclusion as both teams pushed for a winner in the four minutes of added time, with Haughton lashing wide from 25 yards in the closing moments.

The final whistle came, and bought the afternoon to a close, on an afternoon that disappointed manager Dave Challinor.

“A one goal lead is precarious at the best of times, a two goal lead can be, because goals change games.”

“Points can be decent when you come away from home, and if you draw all your away games and win your home games you’d be champions – but it’s not as easy as that.”

“We’re in a situation now where we’re playing catch-up, and we needed to get three points today, but we didn’t and now it’s a big ask.

“With ten games to go we probably need to win eight of them, which we’re capable of doing, but it does make things harder.”