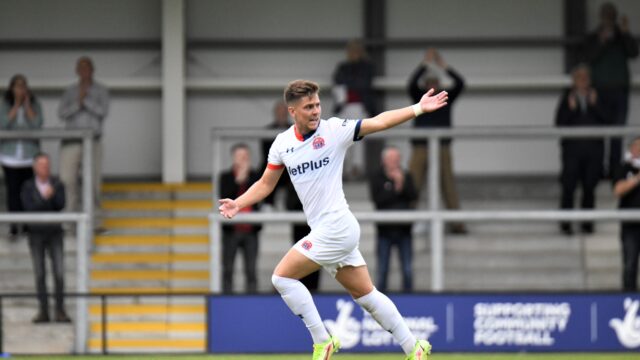 The Coasters were held to a 1-1 draw by Spennymoor Town in the Emirates FA Cup Second Qualifying Round at Mill Farm on Saturday afternoon. Jim Bentley’s side will now travel to Spennymoor’s Brewery Field for the replay on Tuesday evening, after Nick Haughton’s equaliser cancelled out Brad Abbott’s second-half strike.

Coasters boss Bentley made just one change to the starting line up that defeated Bradford Park Avenue 2-0 on the road last weekend, with Jacob Holland-Wilkinson replacing Sam Osborne on the wing, while Jordan Hulme and Stephen Dobbie returned to the bench alongside new recruit Ethan Walker.

It was a fast start to proceedings and midfielder Luke Joyce almost gave the Coasters the lead inside 5 minutes, meeting a Nick Haughton corner on the penalty spot and powering a header towards the far post, only for Joe Tait to clear off the line.

On the quarter of the hour mark, the overlapping Luke Conlan almost caught Town stopper Dale Eve out with a mishit cross, but it was just too high.

Fylde began to find their groove, with Jacob Holland-Wilkinson, Ben Tollitt and Haughton all firing efforts just over the bar from distance.

Refusing to lie down, The Moors fought back and would have taken the lead if it wasn’t for Alex Whitmore’s timely intervention to dispossess Glen Taylor inside the six-yard box before he could pull the trigger.

In the 49th minute, Brad Abbott put Spennymoor Town in front against the run of play. The visitors worked the ball into midfielder Abbott, who fired a low strike into the bottom corner leaving Chris Neal with little hope.

That lead lasted only eight minutes, though, as the in-form Haughton produced a fine finish to curl into the top corner from the edge of the box.

The goal seemed to give the hosts confidence and moments later Blackburn Rovers loanee Dan Pike drove forward and struck an effort from 25-yards-out which Eve managed to hold onto.

As the game entered the final twenty minutes, a crisp pass by David Perkins found Tollitt on the corner of the 18-yard-box, and shifting onto his favoured right-foot, his curling shot was inches wide of finding the far corner.

Jordan Hulme was introduced to the game in the final stages, and it was he who laid the ball off to Haughton who blazed over, despite being positioned to do better.

The final chance fell the way of Moor’s danger man Glen Taylor, and the striker’s fierce drive was somehow turned over the bar by Neal to set up a replay in County Durham on Tuesday evening.