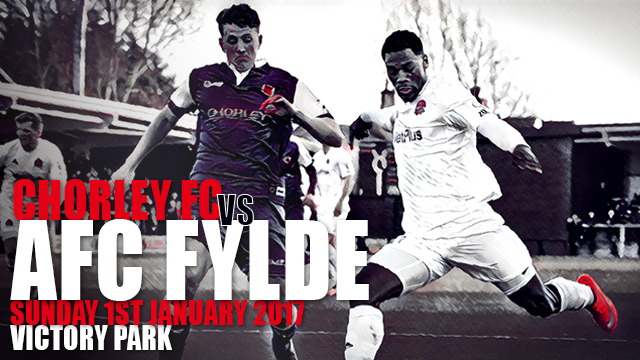 AFC Fylde banished the disappointment of Boxing Day with a thoroughly-deserved 3-1 victory away at rivals Chorley.

Despite falling behind a minute into the second half, Fylde staged a superb comeback with goals from Dom Collins, Dan Bradley and Andy Bond sealing all three points.

The Coasters remain six points clear at the top of the National League North but extended the advantage over their local rivals to nine points.

After disappointing in the reverse fixture, Fylde were quickly out of the traps and Chorley stopper Shaun Rowley had to be alert to keep out Brendon Daniels’ header at the back post inside the first two minutes.

Chorley’s game plan was evident from the offset with long balls punted up to striker Marcus Carver, but it was the visitors who looked the more dangerous in the opening stages – Bradley causing problems down the left for Fylde.

The hosts had their first sight of goal on the 10-minute mark when Matt Challoner found Jake Cottrell lurking at the far post, but the cross was just behind the winger and his header didn’t threaten.

A deep Fylde corner to the back post eluded everyone in the area but Bradley managed to get off a fierce strike that forced a smart save from Rowley. Collins was inches wide with a header from the resultant corner.

Taylor pulled off a fantastic fingertip save to deny Chorley the opener after 20 minutes when he reacted quickly to turn Kieran Charnock’s header from point-blank range over the bar.

The match was becoming a scrappy, stop-start affair with the pitch not conducive to free-flowing football – Caspar Hughes’ wild swipe the only opportunity of note during a lull in play.

A quick counter attack saw Bohan Dixon race down the right but his low driven cross was just behind the three Fylde players lining up on the six yard line.

Chorley started the second half with a bang a took the lead within the opening minute, full-back Adam Blakeman firing a stunning first-time shot from outside the area into the top corner.

The game had come to life and less than five minutes later the visitors were back on level terms. Daniels whipped in an inviting corner from the right and Dom Collins rose highest to nod through a crowd and past the helpless goalkeeper.

Charnock was a whisker away from regaining the lead for the hosts when a long free-kick found him unmarked in the area, but the midfielder could only find the side netting from six yards.

However, midway through the second half the Coasters completed the turnaround. Macauley Wilson floated in a delightful ball from the right and Bradley got in front of his man to expertly guide a header into the far corner.

There was a long delay in play, during with both teams retreated to the changing rooms, as Chorley striker Carver received treatment after a nasty collision with Josh Langley.

An additional sixteen minutes was added on by the referee after the stoppage and the momentum was with the home side.

Goalscorer Blakeman looked to double his tally with another vicious strike from distance but lightning wasn’t to strike twice for the left-back as he fired over from Dale Whitham’s quick corner.

Chorley almost found a way back into the game at the death when Josh O’Keefe nodded across goal to Adam Roscoe, but the midfielder was adjudged to have fouled the keeper with his attempted diving header.

Bradley was close to putting the game to bed in the final minutes but dragged his shot from the edge of the area wide of the far post.

The Coasters did put the final nail in the coffin in the eighteenth minute of injury-time with a sensational breakaway goal. Rowe stole in down the right before slipping in Bradley who in turn put the ball on a plate for Bond to tap home from a couple of yards out.