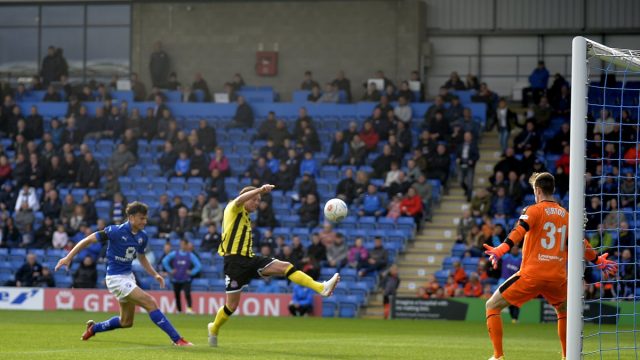 AFC Fylde extended their unbeaten away record in the National League to eight games following a goalless draw against Chesterfield at the Proact Stadium.

Chances were at a premium in Derbyshire with both defences coming out on top.

Manager Dave Challinor made one change to the side that saw off Braintree Town last week with Tom Brewitt making his first start for the Coasters replacing Serhat Tasdemir. Danny Williams, signed on loan from Accrington Stanley on Friday, started on the bench.

Before kick-off there was an impeccably observed minute’s silence in memory of Karole Woodthorpe who sadly passed away earlier this week.

Early on it was clear to see that Chesterfield planned on using the long throw of full back Sam Muggleton to create chances but the Coasters defences did well to head the ball clear time after time despite the aerial threat of Tom Denton for the Spireites.

Danny Rowe had his first half chance as he turned well on the left wing before trying a cross/shot which just missed the head of Jim Kellermann and dragged wide of the far-right post.

Chesterfield took a little while to create their first chance which fell to former West Bromwich Albion striker Marc-Antoine Fortune but his volley was deflected behind for a corner. A couple of minutes later another Fortune effort was blocked well by Neill Byrne.

The hosts had their best chance of the game five minutes before the break. A free kick from Jerome Binnom-Williams was met at the back post by Curtis Weston but who planted his header just wide of the far-right corner.

On the brink of half time the Coasters should have taken the lead. Another cross from Rowe, this time on the right, was perfectly weighted for Joe Cardle but the winger put his effort over the bar.

With twenty minutes to go Fylde created their best chance of the second half. Lovely passing play in midfield saw Philliskirk play in Rowe who chose to try and chip the Chesterfield keeper Callum Burton rather than go for power and his effort eventually hit the roof of the net for a goal kick.

Straight after that Rowe chance the Coasters made their first change with Joe Cardle making way for Ashley Hemmings and with eleven minutes to go Danny Williams came on for his Fylde debut replacing Tom Brewitt who looked solid on his first start for the club.

There was to be controversy five minutes from time as Curtis Weston received a red card for the hosts after a handball which prevented a goalscoring chance for Jim Kellermann. After conferring with the linesman, the decision was reversed due to Kellermann being in an offside position when the ball was played.

The hosts gained some momentum towards the end as youngster Lev Amantchi and the experienced Kyel Reid came on to try and stretch the Coasters backline. Ex Bradford City winger Reid put in two good crosses from the left which the Fylde defence did well to clear.

The referee’s whistle blew to confirm another point on the road for the Coasters who still remain in the final play-off position ahead of next week’s game with Maidstone United at Mill Farm.