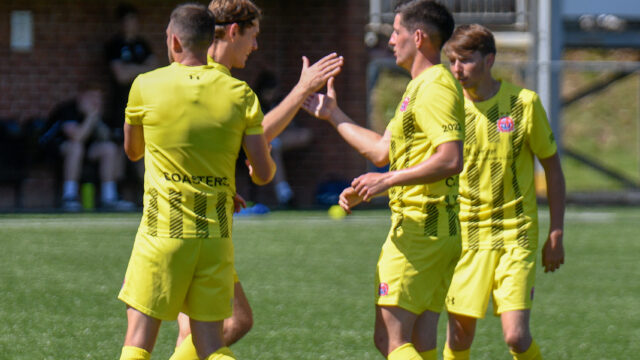 AFC Fylde continued their preparations for the 2021-22 National League North campaign with a comfortable 5-1 victory over Cefn Druids in North Wales.

A Jack Sampson finish came in between a powerful Emeka Obi brace, before two second half strikes from Nick Haughton and Ben Tollitt rounded off a successful week for the Coasters, who had been put through their paces at Dale Army Barracks in Chester in the run up to the game.

The Coasters fielded a strong side with experienced heads like Danny Philliskirk and Nick Haughton mixed with young stars Emeka Obi and goalkeeper Bobby Jones.

The game began at a frantic pace with the Coasters immediately getting to grips with the artificial surface in North Wales. They didn’t have to wait long for the opening goal either as a Liam Nolan cross found Emeka Obi unmarked six yards from goal and the towering central defender made no mistake guiding his header into the bottom right corner.

The hosts soon levelled, though, after hitting Fylde on the break and the Druids striker fired low and hard into the bottom right corner past Bobby Jones in the Coasters goal.

Fylde refused to allow Druids a foothold in the game and it wasn’t long before they had their noses in front again. An awful mistake from the Druids keeper allowed Jack Sampson the chance to round him and tap the ball home unopposed from close range to make it 2-1.

The Druids would quickly have the chance to respond once again, this time it was Jack Byrne who pulled back the shirt of the striker as he was about to shoot, and the referee had no option but to point to the spot. The drama continued, though, as Bobby Jones guessed correctly, tipping the ball round the right post to keep the Coasters ahead.

The third goal was not long in coming and it was that man Obi once again, in almost a carbon copy of his first goal. This time a free kick from Nick Haughton on the right side found an unmarked Obi, who had the simple task of guiding his header past the Druids keeper into the bottom right corner again.

Three nearly became four and five as Philliskirk and then Haughton had good efforts well saved by the hosts’ keeper who was working overtime in the scorching heat.

Hulme went close to adding a fourth a couple of minutes into the second half, poking the ball across the face of goal only for it to be cleared at the last moment by a Druids defender.

Haughton was next to try his luck. After being teed up by Ben Tollitt he tried a trademark curling effort which beat the goalkeeper but not the right hand post as it smacked off the woodwork and agonisingly wide of an onrushing yellow shirt.

The fourth goal came from an incisive Coasters break as Ben Tollitt released Jordan Hulme one-on-one with the goalkeeper, but he took the unselfish
option of squaring the ball across to Nick Haughton who rolled the ball into an empty net from close range.

Into the final 15 minutes and Bentley opted for youth, giving first team minutes to academy products Owen Robinson and Harvey Gregson, who both looked comfortable and confident in possession.

Gregson replaced the final Coasters’ goalscorer Ben Tollitt who found the back of the net with a quarter of an hour to go. Tollitt linked well with Jordan Hulme before curling the ball beautifully into the top right corner from the edge of the box, cue a round of applause from the handful of spectators within the Rock Stadium.

Manager Jim Bentley was rightfully pleased with his team’s showing. Speaking to afcfylde.co.uk after the game, he said:

“I’m really pleased with how today went, we looked confident going forward with some nice link-up play particularly down the right hand side. We’ve managed the heat well, scored some excellent goals and come out of the game with no fresh injuries which is all you can ask for in pre season”.

Bentley was also full of praise for his goalscoring centre back Emeka Obi, saying: “He’s 6ft 6, strong, powerful and has shown himself to be a real threat at set pieces. He only played the first 45 minutes but managed to get himself two goals and probably should have had a hat-trick. He’s really benefitted from the time we’ve spent together at the barracks and his confidence has really grown in the last few weeks.”