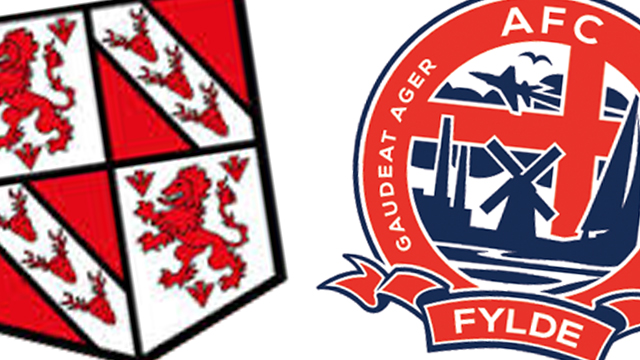 Neither side were able to break the deadlock in a game which saw many half chances but few that really tested either goalkeeper.

Coasters boss Dave Challinor named an unchanged side to the one that thumped Stockport County 4-0 on Easter Monday, with Richie Baker returning to the bench after suspension.

The first chance of the game fell to the hosts when David Moyo failed to shoot with the ball stuck under his feet. The ball eventually came back to Matt Lowe who curled an effort over Ben Hinchliffe’s bar.

Glenn Walker almost gave Brackley the lead after Moyo dispossessed Josh Langley and laid it off to his team mate who bent an effort narrowly over the top left corner.

A swift Fylde counter attack saw neat passing between Sam Finley, Brad Barnes and Matty Hughes find James Hardy on the left but he couldn’t quite get a shot away.

Good work from Hughes on the right wing saw him pass to Danny Rowe who’s drilled low cross was whipped across the face of goal and deflected away for a throw in.

Finley tried his luck with a shot from 20 yards after picking up the ball from Dion Charles however he dragged his shot wide of Sam Hornby’s goal.

Brackley went close to opening the scoring when Lee Ndlovu met a corner to the far post but his effort clipped the side netting.

Brackley’s pacey front two of Moyo and Ndlovu were giving Hannigan and Langley something to think about whilst upfront Fylde were finding it tricky to break down a resolute Saints defence. Adam Sumner had an effort for the Coasters just before the break however his ambitious effort from 25 yards was fired well over.

Challinor made the first change of the game ahead of the restart with Danny Lloyd replacing Matty Hughes.

Fylde had the first half chance of the second half as Finley played in Charles on the right hand side but he fired his shot well over the bar from the edge of the box.

Brackley then came closest to taking the lead when captain Joe Clarke struck a fierce free kick from 20 yards which Hinchliffe did well to tip over the bar for a corner.

Striker Moyo then managed to trick his way past Langley on the left hand side before wasting a good chance by misplacing a pass into the centre of the penalty area.

The Coasters then created a decent chance of their own when Lloyd jinked his way past two Brackley defenders before teeing up Finley to curl a shot from the edge of the box but it was straight at Hornby. Danny Rowe then had another chance seconds later but fired a shot well over the bar from a similar distance.

Fylde began to dominate the game and were patient in their attempts to break the deadlock however the final ball was just not falling right for them on what was a very bobbly pitch.

Rowe turned his marker and made a charge for the Brackley goal but he took one touch too many and was dispossessed agonisingly before he could pull the trigger.

Rowe then put in in a low cross from the left which resulted in a goalmouth scramble before being eventually cleared. The visiting fans claimed for a penalty but the referee wasn’t interested.

Another free kick from Brackley captain Joe Clarke tested Hinchliffe who tipped his effort over the bar for a corner in the last real action of the match.

The Coasters are back in action on Tuesday night when they travel to Stalybridge Celtic.