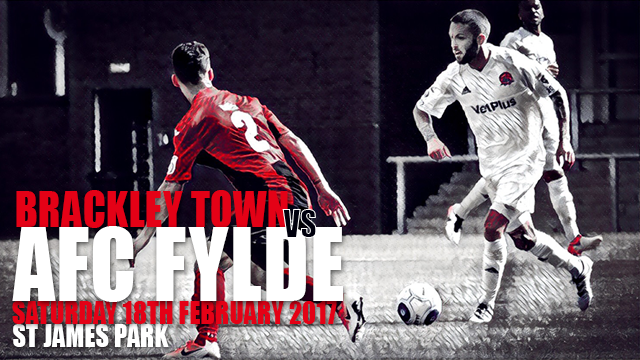 AFC Fylde moved one step closer to their title dream with a gritty 3-1 victory away at Brackley Town.

Danny Rowe opened the scoring for the Coasters before Steve Williams put the visitors in control after the break. Brackley pulled one back a minute later through James Clifton but a late strike from Rowe made sure of a crucial three points.

Manager Challinor handed new signing Laurence Maguire his Fylde debut following his loan move from Chesterfield on Friday. Williams returned from injury to partner the new man at the back.

After a couple of half chances for the hosts, Fylde had the first real opportunity of the game when Brendon Daniels threw himself at Dan Bradley’s inviting cross but, despite making decent contact, his header was straight at Laurie Walker in the Brackley goal.

Debutant Matthew Barnes-Homer had a headed chance for the home side a moment later but the frontman was off target from Adam Walker’s left wing cross.

Right-back Ellis Myles was given far too much time and space down the right and he took full advantage, cutting inside and firing a strike a whisker wide of the far post.

The Coasters had goalkeeper Rhys Taylor to thank for keep the hosts at bay on the fifteen-minute mark when a strike from Barnes-Homer squirmed through invitingly to Glenn Walker but Taylor had other ideas and pounced on the loose ball.

However, five minutes later and perhaps against the run of play, the visitors took the lead. Maguire saw his goalbound header blocked, but Daniels put the ball back into the danger area for the unmarked Rowe to slot home left footed from eight yards.

Bradley was agonisingly close to doubling the Coasters’ advantage on the half-hour when he was played through although, despite doing well to cut inside and find space, his eventual strike was a foot wide of the far post.

The visitors looked happy to sit back after the goal and soak up any pressure and comfortably contained the Saints until the break.

Rowe had the opportunity to stamp his authority on the match further still with a set-piece from fully 35-yards after Andy Bond had been tripped but his attempt slammed into the wall.

A clumsy challenge on the byline from Dan Jones gave Glenn Walker a chance to whip the ball into the danger area and although he found captain Alex Gudger, the central defender’s header drifted harmlessly wide.

Jordan Gough hit one in anger from 30 yards that flew over the bar as the hosts looked for a way back into the contest. Glenn Walker was far closer with a back post header seconds later that glanced wide.

The pressure was building and Armson almost finished off a clever free-kick routine when he latched onto Clifton’s low ball, but fizzed an effort narrowly over the top.

At the other end, Bradley had a glorious chance to put some breathing space between the two sides when he raced onto a loose ball although after beating his man for pace, his strike was kept out by the legs of Walker.

Fylde found their elusive second goal with the very next attack shortly past the hour mark. Daniels’ corner from the right sneaked through a crowd of players and bounced back off the far post allowing Williams the simplest of tap ins.

However, the celebrations were short-lived when a Brackley corner came in from the right and Clifton volleyed home at the back post to immediately reduce the deficit.

The home side introduced Lee Ndlovu and the forward was close to breaking Fylde hearts when he bundled through three challenges before rifling a foot over from just inside the area.

Then, with five minutes to go, the Coasters had the all-important third. Bradley played a ball over the top to Bond who did well to control and play in Rowe to slide home his second of the afternoon and 40th of the season.

The Saints nearly pulled a goal back when winger Adam Walker struck the crossbar from distance in added time and Taylor saved at the feet of Steve Diggin who was closing in on the rebound.