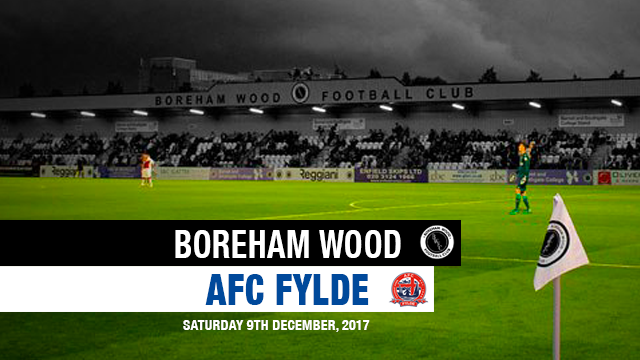 Angelo Balanta’s first-half strike was the difference between the sides, although the Coasters had two glorious chances at the death to earn a share of the spoils.

Dave Challinor welcomed back three of his first teamers for the trip to the capital with Luke Burke, Jack Muldoon and Andy Mangan returning to the starting line-up.

Their early pressure paid dividends as they took the lead inside six minutes. Top scorer Andrade delivered a telling cross into the area and whilst Lynch did well to get a fingertip to the ball, Balanta was on hand to lash a strike into the top corner from eight yards.

The Coasters would have been level moments later if it wasn’t for a sensational save from Grant Smith. Finley picked up the ball on the edge of the area and let fly with a sublime curling strike that was clawed out of the top corner by the Boreham Wood stopper.

Fylde looked keen to draw level as a matter of urgency and the unlikely figure of George Edmundson almost found a way through, however his flicked effort from Mangan’s low was just wide of the upright.

Opportunities were becoming few and far between as the half progressed with little between the sides, Lewis Montrose’s tame header that drifted wide a rare opportunity for the Coasters.

Shaun Jeffers gave the visitors a scare on the half-hour when he turned in the box and fizzed a low cross into the six-yard box, however Edmundson was on hand to clear the danger.

The Boreham Wood winger went closer still seconds later when Andrade played him clean through, however Lynch stood tall to make a top draw save.

It wasn’t all one-way traffic and Jordan Tunnicliffe was left with his head in his hands as his powerful header arrowed agonisingly wide from a corner.

Lynch was once again proving his worth, rushing out to deny the unmarked Ricky Shakes what looked to be a certainly goal on the edge of the Fylde area as the half-time whistle approached.

The Coasters again went close as the board went up when Rowe’s strike through a crowd bounced up kindly for Edmundson who could only head over from six yards.

The second-half proved equally tight as neither side really looked like adding to the scoreline – Andrade’s ambitious free-kick from 30 yards that whistled wide the closest either team went inside the first 10 minutes of the second period.

The hosts were starting to take the game to Fylde, with Andrade proving a real handful down the flank. Challinor introduced winger Jonny Smith in an attempt to provide an outlet for the penned in Coasters.

There was still little in the way of goalmouth action for the visitors as the second-half reached its mid-point – Tunnicliffe glanced a header wide as Smith remained relatively untroubled.

Rowe showed his first real sign of intent when he let fly from 25 yards and although Smith spilled his vicious effort, the ball was taken off the toe of Jonny Smith in the nick of time.

The league’s top scorer was presented with another chance to test the home stopper when he stood over a 35-yard free-kick, however the frontman uncharacteristically ballooned his strike in to Row Z (or Row D as it is here at Meadow Park!)

Fylde should have been back on level terms with just over five minutes to go with their best chance of the match. Smith took the ball down well on the 18-yard line and his touch gave him a clear strike on goal however his attempt was straight at namesake Smith.

Fellow substitute Matt Blinkhorn had an equally inviting opportunity less than a minute later when Jordan Richards’ long ball into the area picked out the lucking forward on the six yard line however Smith again did tremendously well to palm away his goal bound toe poke.