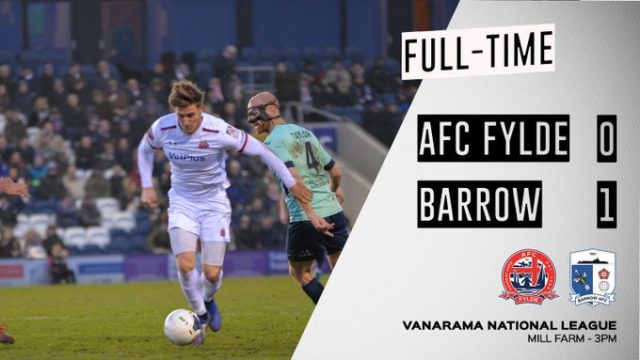 Scott Quigley’s second-half goal was enough for league leaders Barrow to record a narrow victory at Mill Farm, on an afternoon where Matty Kosylo saw red late on.

Jim Bentley made three changes to the side that lost to Stockport County, with club captain Lewis Montrose returning to the side in the heart of midfield.

The first half was an even affair, with the first real chance of the game falling the way of former Barrow forward Jordan Williams.

Williams rushed his effort though, and sent the ball flying over the bar from inside the penalty area, giving the Bluebirds a big let off.

Both sides had to work hard to create chances, with John Rooney firing a 25 yard free-kick narrowly over Sam Hornby’s bar.

Kyle Jameson looked to forge an opportunity for Danny Rowe with the half coming to its conclusion, but the Fylde number nine couldn’t get to the excellently threaded through ball, and Dixon was there to collect it. 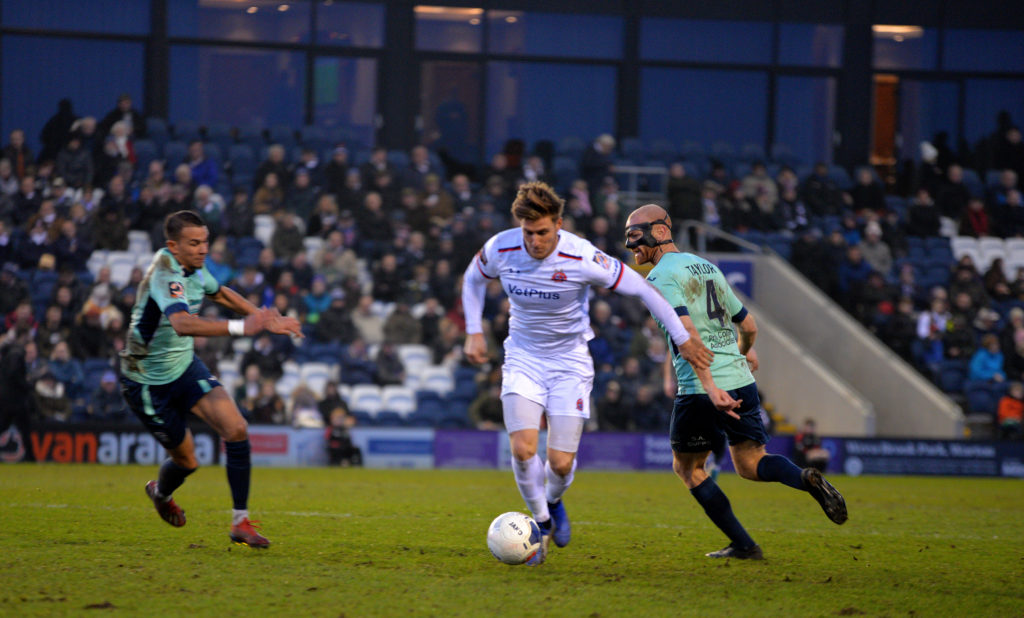 With the game closely positioned for the second half, it was a mistake, ultimately, that allowed Barrow to get their noses in front.

Lewis Montrose looked to play a pass back to Coasters keeper Sam Hornby, but did so without paying attention to the whereabouts of Barrow’s top goalscorer Quigley.

Quigley latched onto the relaxed back pass, took one touch, before curling it inside the left hand side of Sam Hornby’s goal – sending the travelling Barrow fans into raptures.

Barrow very nearly had a quick second afterwards through Olly Dyson, with the Coasters looking vulnerable at the back.

His effort deflected off of a Coasters defender and bounced off of the post though, and Fylde were able to clear their lines and take stock.

The Coasters responded with a triple substitution on the hour mark, as Haughton, Willoughby and Kosylo came on to make an impact.

The trio certainly looked the most likely to bring the Coasters level, with Willoughby flashing a header wide, before Kosylo was brought down on the edge of the box.

Nick Haughton stood up to take it, and seemed to everyone in the ground as if he had equalised, but his effort crept agonisingly wide of the top corner.

Six minutes of added time followed, and whilst Fylde huffed and puffer, the frustration ultimately told.

Coasters forward Matty Kosylo saw red for an off of the ball incident that the Assistant Referee had spotted, and with it drew a disappointing afternoon to a close.

It marked the end of a tough festive period for the Coasters, who drop down to 21st position following results in the National League.