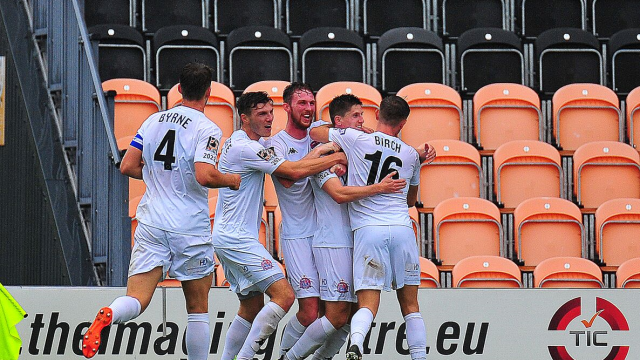 AFC Fylde maintained their unbeaten away record in the National League this season with a hard-fought 1-1 draw at Barnet.

A first Coasters goal for Danny Philliskirk cancelled out Shaquille Coulthirst’s opener for the hosts but Dave Challinor’s men could have come away with all three points.

Challinor made one change to the side that swept aside Aldershot Town last week with Arlen Birch replacing Luke Burke who missed out through injury.

Barnet made the brighter start early on but it was Fylde who had the ball in the net first. Jim Kellermann was found in space inside the box and he slid the ball home from 12 yards but unfortunately, the linesman’s flag was raised for offside.

The hosts responded and the impressive Jack Taylor forced Lynch into a decent save curling a low effort from the edge of the box.

Five minutes later the Coasters fell behind. The wet conditions forced a slip from centre back Jordan Tunnicliffe which allowed Shaquille Coulthirst time to turn and from the edge of the box the former Tottenham striker placed the ball into the bottom right corner out of the reach of Lynch.

The Coasters were not behind for long though. A short corner routine ended with Joe Cardle whipping in an excellent cross from the right which was met unopposed by Danny Philliskirk who made no mistake flicking his header past Cousins from 8 yards.

Back came Barnet as Wes Fonguck and then Jack Taylor again tested Lynch from the edge of the box. Whilst the hosts were creating most of the chances in the first half, the Coasters remained organised and largely restricted them to speculative efforts from range.

The opening stages of the second half were evenly contested. The first major chance fell for Fylde when Serhat Tasdemir did brilliantly to find Rowe with a perfectly weighted ball. Rowe executed a trademark turn but his low effort lacked the power to test Cousins in the Barnet goal.

With 25 minutes to go Challinor made his first change as Andy Bond replaced Jim Kellermann and the experienced midfielder put in an impressive cameo performance in the latter stages.

On 70 minutes the Coasters should have taken the lead. Quick passing play between Bond and Rowe allowed Tasdemir the chance to bear down on goal. The youngster’s shot from the edge of the box was parried by Cousins straight into the path of the unmarked Cardle but somehow the winger skewed the rebound wide of the left post.

That was to be Tasdemir’s last act of the game as he was then replaced by Ashley Hemmings who worked hard down the right-hand side.

The final chance of the game fell to Rowe. Cardle did well to worm his way past his marker down the left and he teed up Rowe on the edge of the box who produced an absolutely thunderous half volley which smacked off the right post to the relief of the majority of those in The Hive.

The final whistle blew to confirm a fifth draw from six away games for the Coasters this season who drop one position to eighth in the table.

Fylde head over the Pennines to face FC Halifax Town on Tuesday night before welcoming Braintree Town to Mill Farm on Saturday.