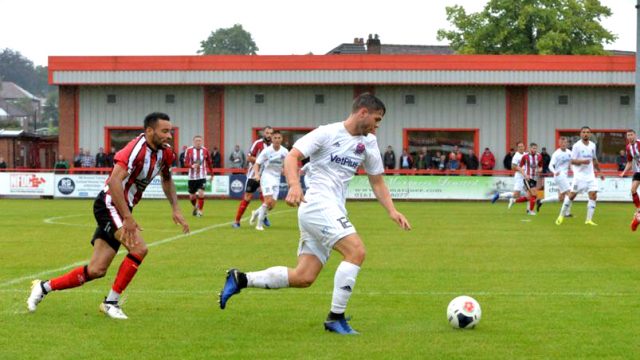 The Coasters pre-season ended in defeat at Moss Lane, on a wetschedule with a win at Moss Lane, courtesy of a late Jordan Williams header.

The game was fiercely contested from the off, and after a late challenge from Sean Williams on Danny Philliskirk, a confrontation ensued.

The challenge was late, and two footed – and Philliskirk was lucky to escape without an injury, and Williams found himself in the referee’s book.

Moments later, Rowe had the chance to bend a free-kick in 20 yards from goal – but his effort went straight into the wall, and Altrincham cleared.

It was a very wet afternoon, and the surface had plenty of standing water which made play unpredictable at times, often slowing up.

Jordan Hulme worked tirelessly up top for Alty, with plenty of long balls aimed in his direction, however the new partnership of Whitmore and Byrne seemed able to cope.

Altrincham however did get their first sight of goal 20 minutes in, when Johnston’s low cross was crucially steered behind by Burke, as Arnold was waiting to slot home.

Johnston quickly became the main threat in the first half, with teasing set-pieces and darting runs opening up chances for Altrincham.

Their spell of dominance soon paid off, as a slick move was finished off expertly by Nathan Arnold, dispatching it low into the bottom corner, giving Montgomery no chance.

The Coasters looked to get back into the game quickly, and came very close to levelling through striker Danny Rowe.

Good work from Burke on the right saw him play in a teasing cross to the back post which was met by Rowe.

His header cannoned back off the bar, before his follow up shot was cleared off the line and Haughton saw his effort blocked too.

The hosts doubled their lead before the interval, as Sean Williams stepped up to sweetly strike a free-kick through the wall and beyond Montgomery into the net.

After the break, the Coasters came back out the stronger of the two sides, and it wasn’t long before they had the rewards for their efforts.

An inswinging corner wasn’t cleared properly, and Danny Rowe was there to volley home beyond the aptly named Drench in goal.

This stoked the fire, and Fylde went as close as they’d come to levelling when Alex Whitmore’s header was cleared off of the line, and scrambled to safety.

The Coasters dictated the game from here on in, and were unlucky not to restore parity, before a crucial free-kick late on for Altrincham.

Stepping up once again, Sean Williams fired his second free-kick of the day past Montgomery, this time his effort finding the net after hitting the inside of the post.

Credit went to Fylde, who kept their intensity up to the end, looking to grab another goal, with Williams and Rowe in particular looking the most likely to make things happen.

The final whistle went, with Altrincham no doubt the happier of the two teams with their efforts on a day where the elements played their part.

With pre-season concluded, the Coasters next face Aldershot Town away from home on the opening day of the Vanarama National League season.

It all kicks off on August 3rd, kick off 3pm at the EBB Stadium – official away travel is on sale here.