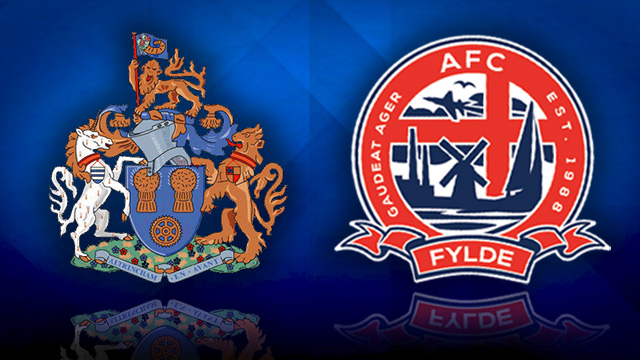 AFC Fylde hit newly-relegated Altrincham for six in a stunning display at the J. Davidson Stadium.

Striker Danny Rowe opened the scoring early in the match and the Coasters added a further four goals without reply in an unbelievable first-half showing. Andy Bond added a sixth immediately after the break and the visitors held on for the result of the National League North season so far.

Dave Challinor made two changes to the side that dropped points against Brackley Town last time out with Caspar Hughes and James Hardy replacing Richie Baker and Matty Hughes.

After a few minutes of early pressure from the hosts, Fylde took a seventh-minute lead with a fantastic goal. Danny Holmes found Hardy in space down the right and the young midfielder’s cutback fell perfectly for Rowe who neatly slotted the ball into the bottom corner from ten yards.

The lead was doubled almost instantly as the visitors continued their electric start to the match. Bohan Dixon picked the ball up seemingly innocently 30 yards out, however after advancing slightly closer to goal the towering midfielder crashed home a fine strike into the bottom left hand corner.

Alty created their first opening of the game on 15 minutes when Daniel Hattersley tried his luck from 20 yards however goalkeeper Rhys Taylor was equal to his vicious strike.

The Fylde whirlwind wasn’t over and a minute later it was three. Dixon was played clean through and whilst a last ditch tackle halted him in his tracks, there was Daniels to lap up the loose ball with aplomb.

The visitors looked like piling the misery on the vanishing hosts when Hardy tricked his way into box before being scythed down but the referee was unmoved.

The match raced straight down to the other end and only another fine save from Taylor prevented Altrincham from pulling one back.

Fylde added an incredible forth goal on the half hour mark. Winger Hardy once again made his way into the box, gave his marker the eyes at the byline before smashing the ball across goal into the far corner from an impossible angle.

Things were just going from bad to worse for the Altrincham as Fylde grabbed a deserved fifth on 37 minutes. Daniels delivered a delightful ball into the box from the left and Dixon couldn’t miss at the back post for his second of the evening.

The Coasters took just one second-half minute to add a sixth goal, Andy Bond curling a sublime strike into the top corner from 25 yards via the crossbar for his first goal in Fylde colours.

Altrincham should have grabbed a consolation goal five minutes after the break when Damian Reeves was played clean through on the Fylde goal, however his neat strike came back off the left hand post.

Dixon had visions of an unlikely hat-trick when he raced through and cut-back on to his favoured right foot but his low effort from the edge of the six yard box was blocked.

The midfielder was on fire and was even closer to sealing his treble on the hour mark when he saw his first time shot from distance clip the outside of the post.

The match was beginning to understandably fizzle out as the clock reaches the final ten minutes, with the visitors happy to keep possession.

After chasing the ball for the majority of the match, Altrincham were put out of their misery by the referee’s whistle without even a second of injury time.