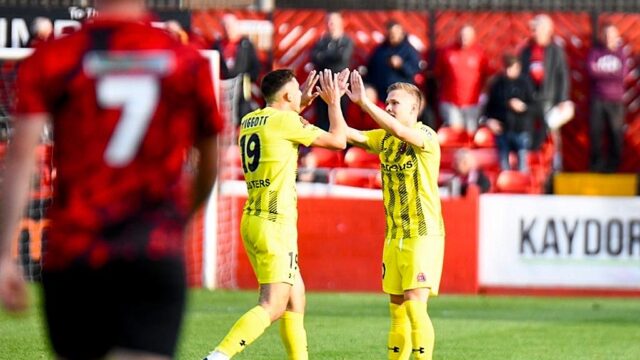 The Coasters earned a late point against Alfreton Town in the National League North, thanks to a Ethan Walker strike at the Impact Arena Stadium.

An entertaining fixture saw the home side take the lead through Bailey Hobson after a scramble in the Fylde penalty area.

However, Walker, who entered the action as a late substitution, popped up with a terrific strike from just inside the 18-yard box to salvage a point for Fylde in the dying embers of the game.

Jim Bentley made two changes to the Coasters side from their victory over Kidderminster Harriers last time out, as Emeka Obi & Stephen Dobbie came into the starting XI to replace Dan Pike & Sam Osborne.

The Coasters started brightly – however, it was Alfreton who had the first chance of the game when Dayle Southwell found space behind the Fylde defence, though Chris Neal got down well to deny his powerful effort on goal.

Without any clear-cut chances in the next ten minutes, Nick Haughton managed to dispossess the hosts in the final third and drive towards goal. He twisted and turned but couldn’t quite generate enough power on his shot to trouble George Willis.

It then looked as though the Coasters had taken the lead through Jack Sampson after he met Tollitt’s cross in the six-yard box, only to be denied by Willis’ outstretched arm.

Haughton was causing problems, as always, and he was brought down by Rob Evans just outside the area after a silky run towards goal. The attacking midfielder picked himself up and took the free-kick but struck the bar with his effort.

Just five minutes into the second half, it was nearly advantage Fylde when Emeka Obi floated a superb ball over the top of the Town defence for Dobbie to run on to – he took one touch and stung the palms of Willis, who kept the scoreline level.

The Coasters were in the ascendency, and Haughton nearly had Fylde in front when he drifted inside from the left and looked to bend an effort in at the far post but fired wide.

However, it only takes one chance, and the hosts took that chance. Confusion in the Fylde penalty area resulted in a cross being headed on to the post by Jamie Stott. It then fell to Yusifu Ceesay, whose shot at goal was blocked by Alex Whitmore and fell to the feet of Bailey Hobson, who was there to turn the ball into the net.

Hobson’s goal gave the hosts confidence going forward, which led to Ceesay trying to creep a shot in at the far post, though Neal was equal to the strike.

With five minutes left to play, the Coasters got themselves back on level terms through Walker when he burst down the left, beat his man by cutting inside on his right foot and rifled a strike into the far corner of the net.

Just moments before the final whistle, the Coasters had a scare after Hobson slipped a ball through for Elliot Reeves, but Neal was there to save the day with a last-ditch stop to earn the Coasters a point.