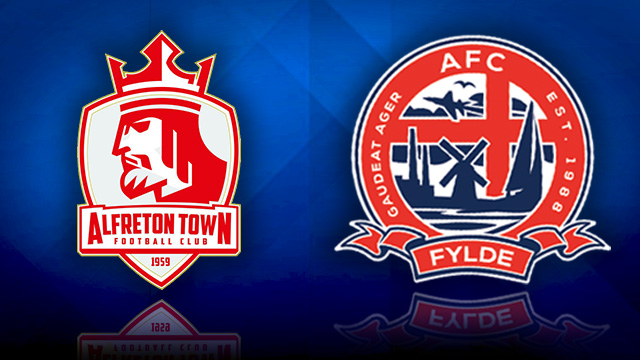 Danny Rowe struck an incredible four goals as AFC Fylde came out on top in an entertaining match against Alfreton Town.

Despite trailing at the break, an attacking masterclass in the second half from the Coasters earned a second away win in just five days.

Dave Challinor stuck with the same side that dismantled Altrincham Town in the week.

The wind was causing problems in the early stages and Alfreton tested the Coasters with some dangerous corners however it was the visitors that took the lead in emphatic fashion.

James Hardy was felled 20 yards from goal and up stepped free-kick specialist Rowe to smash the ball into the top left hand corner for his third goal of the season.

Hardy was presented with a chance of his own moments later when Tom Kennedy whipped in a delightful cross from the left however the former Manchester City youngster misjudged his header and was well over.

The scores were level just a few minutes later when Ryan Wilson was played through on goal by Todd Jordan and the striker made no mistake firing past Rhys Taylor.

However, goalscorer Rowe had other ideas and restored the visitor’s lead just two minutes later. The frontman latched onto Bohan Dixon’s knock down, raced into the area, cut back onto his right foot and rolled the ball past the helpless goalkeeper.

The match was becoming somewhat of a spectacle as the hosts once again drew level on 21 minutes when Craig Westcarr curled home a sublime free-kick of his own into the bottom left corner.

Tuesday night’s two-goal hero Dixon was keen to get his name on the scoresheet once again and fired a rocket from fully 35 that flew narrowly wide of the post.

It was Alfreton’s turn to pose a threat and only a fine fingertip save from Taylor prevented the host’s from taking the lead. However, the Reds were indeed ahead from the resultant corner. Sam Smith was impeded by Josh Langlay in the box and captain Dan Bradley made no mistake from the spot, sending Taylor the wrong way.

The hosts almost made it four in first half added time after Bradley dispossessed Steve Williams and crossed for Westcarr to turn home however to Fylde’s relief the linesman’s flag was raised.

Williams looked to make amends shortly after the break when he rose to meet Danny Holmes’ cross at the back post but his header across goal was well wide.

Just six minutes into the second period and the Coasters back on level terms. Rowe lined up for a free-kick 25 yards from goal and the sheer power of the strike took it past Fabian Speiss and into the far corner for his hat-trick.

Alfreton should have been back ahead when the ball arrived at the feet of Bradley at the back post, but somehow the Reds’ captain could only find the side netting from point-blank range. Fylde were forced into a substitution on the hour mark when goalkeeper Taylor, who was injured in the lead up to the chance, limped off to be replaced by debutant Tony Thompson.

Fylde were beginning to pile on the pressure in the pursuit of a winner and Andy Bond, scorer of a wonderful goal last time out, wasn’t far off with a curling effort. Fantastic play from Hardy on the edge of the area presented Dixon with a real chance but his close range poke was deflected around the post.

The fourth goal deservedly arrived on 69 minutes and it was a remarkable fourth for Rowe as he pounced on a loose ball after a goalmouth scramble to tuck the ball home from six yards.

More great football from visitors was almost finished off by Dixon but his well stuck shot sailed agonisingly wide of the far post with just over ten minutes to play.

The match was put to bed two minutes later with a fifth for the visitors. Rowe did superbly well to set Hardy free down the centre, he in turn played in Dixon and whilst the midfielder shot was initially saved, Hardy was on hand to stick home the loose ball.

Dixon had a chance to put the final nail in the coffin with seconds left to play but he blazed Holmes’ right wing cross over the bar from ten yards.