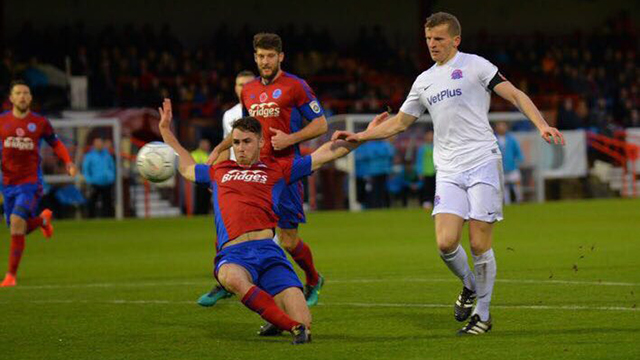 Danny Rowe cancelled out Shamir Fenelon’s first-half opener shortly after the break, before both sides saw red as tempers flared. Shots defender Will Evans was to have the final say, heading home in the last five minutes to seal all three points for the hosts.

Manager Dave Challinor stuck with the side that progressed to the second round of the FA Cup at the expense of Kidderminster Harriers.

Both sides looked sharp from the off, hitting each other on the counter, although it was Aldershot that went the closest when Fabien Robert’s teasing cross was narrowly missed on the six yard line by the lurking Bernard Mensah.

Shots danger man Mensah should have opening the scoring on the quarter hour when Jason Taylor was dispossessed in the centre of the park and the winger found himself clean through only to be thwarted by a phenomenal save from Jay Lynch.

A goal was coming for the hosts and duly arrived after 20 minutes. Mensah’s cross was misjudged by George Edmundson and pounced upon by Fenelon who cushioned his header past Lynch.

With the home side in control, Fylde looked to hit on the break when Sam Finley picked out Jonny Smith with a delightful ball over the top, however the wide man’s cross was straight into the arms of debutant goalkeeper Lewis Ward.

Mensah was proving a handful for the visitors and almost got in on the act himself when his curling free-kick was deflected narrowly wide of the near post.

Fylde had another lucky escape when Robert’s put the ball on a plate for Jim Kellerman at the back post, however the Shot’s midfielder skewed his effort up and over the bar.

The Coasters will have been hoping for an improvement after the break and started well, Jack Muldoon breaking away before ballooning his strike well over the bar from 20 yards.

Kellerman took an equally wild swipe at the other end that suffered a similar fate moments later.

After a relatively subdued start to the second period, the match sprang to life with a moment of magic from the visitors. Top scorer Danny Rowe latched onto an incisive through ball from Luke Burke before deftly clipping the ball over the advancing goalkeeper.

However, the match was to turn sour when Fylde were reduced to ten. Muldoon got involved with in an off the ball tangle with Evans and, after discussions with his assistant, referee Sam Purkiss sent the Coasters man for an early bath.

It almost got worse for the stubborn visitors with 15 minutes remaining when left-back Adam McDonnell lashed a wicked volley across goal and narrowly wide of the top corner.

The bad tempered nature of the match continued as the referee evened up the numbers in the final ten minutes. Manny Oyekele, on as a substitute only moments earlier, received his marching orders for clattering fellow sub Serhat Tasdemir on the half-way line.

The decision galvanised the Coasters and quick throw from Bond sent Finley flying down the right and whilst his low cross found Rowe unmarked in the centre, Ward was on his toes to make a smart block.

However, no sooner was the ball back up at the other end, than Aldershot were ahead. A free-kick from the right was flicked on and nodded home at the back post from close range by Evans.

Rowe almost saved a point for Fylde in the final seconds however his strike from a tight angle was nicked around the post for a corner.