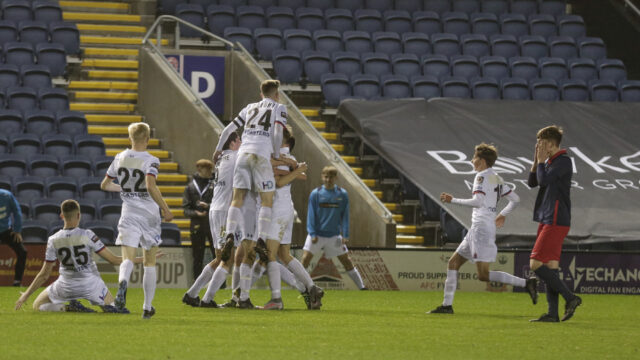 Goals from Sam Birch, Rhys Long and Maine Walder secured a monumental win for AFC Fylde’s Under-18’s, as they booked a place in the Third Round of the FA Youth Cup for the first time in the club’s history.

Captain, Maine Walder led by example to head the young side further clear, though with ten minutes to go Jonathan Krakue pulled one back for The Black Cats.

A fiery encounter also saw three red cards awarded to an ill-disciplined Sunderland outfit, but that didn’t take anything away from the Coasters’ superb performance throughout.

The game began in a nervy fashion, with both sides opting for a long and direct style of play, in an attempt to put each other under pressure.

Sunderland were the first to threaten out of the two sides, as Jay Turner-Cook saw Aaron Lancaster off his line and attempted an audacious effort from 30 yards out, though the ball bounced onto the roof of the net to spare Lancaster’s blushes.

The Coasters soon bounced back though, and it was Rhys Long who initiated it. The lively winger found himself in some space down the left, took the ball past his man, but ended up running the ball out of play before he was able to pull the trigger.

After a quarter of an hour, Fylde settled into the match and started to find their rhythm.

Sam Birch found Curtis Poole at the back post with a superb chip, but Adam Richardson was quick off his line to deal with the danger.

The game then had a major turning point, as Sunderland’s highly-rated Ryan Gooch was given his marching orders following a strong challenge on Long.

The dismissal gave the home side the confidence to push more bodies forward, and in doing so Harvey Gregson was presented with a chance. The midfielder wriggled away from his marker and met a header from the left, though his effort ended up on the roof of the net.

Then – with 28 minutes on the clock –  came the moment that put the Coasters in the driving seat. After Long had seemingly lost possession of the ball, he somehow managed to find Birch with an inventive back-heel, who then drove down the line and attempted to cross into the middle. The looping cross, initially aimed towards the centre of the box, somehow dropped over the goalkeeper and into the back of the net.

Just six minutes later, Long went from provider to finisher, smashing a low driven effort past Richardson and into the far corner.

With just minutes to go until the break, the visitors poured bodies forward in the hope of halving the deficit. Harry Jones’ crucial goal-line intervention, however, ensured that the Coasters marched in at the break two goals to the good.

Prendergast’s team started the second-half well, with the first chance falling to midfielder, Gregson, who poked Poole’s cross into the hands of Richardson.

Theo Ball then brought the home side forward, and was inches away from scoring a third goal;  his shot from the edge of the area pinging back off the post and out for a goal kick.

Five minutes of end-to-end madness continued. The visitors this time coming forward with an attack of their own. In amongst the chaos of the penalty area, a drilled effort struck the bar.

After ten minutes of pulsating football, The Coasters managed to put their foot on the ball and reduce the tempo of the match. After some patient build-up play, Ball, who caused problems for the Sunderland defence all night, hit a shot just wide of the post, before Sam Gibbons was brought down near the touchline for a Fylde free-kick.

The free-kick led to The Coasters third, with Owen Robinson playing it short to Pool, who drifted in from the left and hung an inviting cross up towards the back post. Maine Walder needed no invitation, as he rose above his marker to glance a header home from close range.

Walder was in the thick of the action shortly after, when he blocked a fierce shot to keep the Coasters three goal advantage in tact.

As the clock tuck, Sunderland stepped up the tempo in the hope of finding a way back into the tie. Captain, Josh Baggs nearly set The Black Cats on their way to a comeback, when he drove out of defence and struck a 30-yard shot off the crossbar.

James Foster then had the ball in the back of the net for the Category One Academy, but the linesman had his flag up for offside.

The visitors did eventually grab a goal back on 76 minutes. After Sunderland were awarded a free-kick just outside of the 18-yard box, the ball was sent in towards Jonathan Krakue who headed past Lancaster.

After the goal went in, Sunderland tried to grab the ball off Lancaster so they could restart play. However, Josh Baggs raised his hands to leave the referee with no choice but to send him off.

In the dying embers, the visitors saw the referee brandish a third red card for another late and mistimed challenge.

For the remainder of the match the home side controlled possession and killed the game, so to speak. Eventually, the referee blew time on a game that had everything; goals, red cards; last ditch tackles, and tonnes of energy.

The sound of ‘Sweet Caroline’ swept the Mill Farm corridors after the game, as the Young Coasters celebrated a place in the Third Round of the FA Youth for the first time in the club’s history.

The next hurdle will be getting past Cambridge United in the next round, in the hope that the magnificent run can go on.

Man Of The Match- Maine Walder