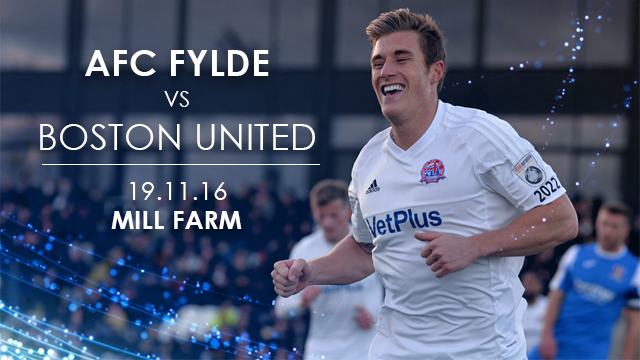 AFC Fylde were on cloud nine after a resounding victory over Boston United at Mill Farm.

The Coasters hit a remarkable NINE goals in a sensational display to maintain their four point lead at the top of the National League North.

The hosts started brightly and were a whisker away from taking the lead when Sam Finley’s snapshot from 18-yards flew narrowly wide.

Finley looked to turn provider moments later when he slipped in Andy Bond, but the midfielder lost his footing at the vital moment and the ball ran through to the goalkeeper.

However against the run of play, Boston took the lead. After just 10 minutes Jay Rollins latched on to a long ball up the pitch and rifled a crisp strike past Rhys Taylor.

The momentum had swung the way of the visitors and Taylor had to be alert to keep out Gregg Smith’s powerful header.

Their lead didn’t last long though and just five minutes after the opener, the Coasters were level. Hardy broke down the right and squared for Daniels who took a touch before placing the ball past Dion-Curtis Henry in the Boston goal.

Finley was close again when his well-struck landed on the roof of a grateful Henry’s goal.

The turnaround was complete inside 25 minutes when Hardy’s defence splitting pass found Bond racing into the area and the midfield man made up for his earlier miss by sliding the ball underneath Henry.

Fylde stretched their advantage further still on the half hour mark and it was a third assist for Hardy. The young midfielder was played in by Bohan Dixon and his goalbound effort was smashed home at the back post by Rowe.

Hardy almost got himself on the scoresheet in spectacular fashion when Macauley Wilson picked him out in the area but his improved backheel was scrambled clear by the goalkeeper.

However a minute later and the England C man had his goal. Rowe’s low cross was spilled by Henry and Hardy was on hand to collect the loose ball and fire into the opposite corner of the goal.

Shortly before half-time the Coasters had five. Daniels’ cross from the left was deflected back into the path of Rowe who made no mistake lashing the ball into the top corner from eight yards.

The scoreline was becoming increasingly embarrassing for the shell-shocked visitors as Rowe completed his hat-trick before the half-time whistle, nodding home Bond’s cross from point blank range.

Dixon took aim seconds after the restart as the Coasters went in search of a magnificent seven but his low strike was cleared off the line.

Boston stunned the hosts when they pulled a surprise goal back three minutes into the second period – Rollins outmuscling Josh Langley and picking out the far corner for his second of the afternoon.

Boston’s James Goode was lucky not to be given his marching orders when he scythed down the galloping Dixon but Rowe could only find the side netting with the resultant free-kick.

Normality was resumed ten minutes after the break when the electric Hardy squared into the path of Rowe and his in-form teammate crashed the ball into the top corner at the first time of asking.

Daniels spurned a double-header of chances to make it eight on the hour mark when an initial effort flashed wide, before he was inches from meeting Rowe’s low strike at the back post.

However, the left winger redeemed himself two minutes later with his second of the afternoon. Some delightful interplay between Hardy and Finley saw the ball find Daniels to the left of the box and he slid the ball past the hapless goalkeeper.

Dixon was still looking for his first of the afternoon and wasn’t far off with a dipping volley after being expertly picked out by Finley. Substitute Matt Blinkhorn flicked a header over the bar as Fylde continued to impose their dominance on the match.

There was no let up from the ruthless home side and it was a moment to forget for keeper Henry when he spilled Langley’s header, only to watch on in despair as the ball rolled into the bottom corner.

Fylde almost had made it double figures with five minutes to play when the unlikely figure of right-back Wilson was put through by Matty Hughes but the Blackpool loanee lost his footing just before pulling the trigger. Dixon tried his luck with a powerful shot from 12 yards, but this time the keeper was on hand to make a stunning save.