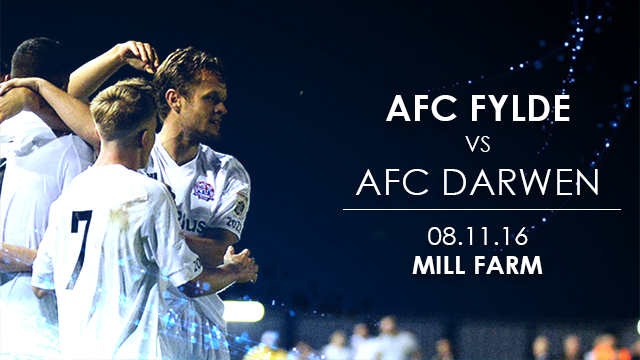 A first-half hat-trick from 16-year-old debutant Serhat Tasdemir guided AFC Fylde through to the third round of the Lancashire FA Challenge Trophy with a 6-2 victory over AFC Darwen.

The youngster’s treble, coupled with a brace from Matt Blinkhorn and a freak goal from Richie Baker, put the Coasters six goals ahead, before Darwen netted a couple of second-half consolation strikes.

Manager Dave Challinor named a strong side, including nine of the squad that thrashed Stalybridge Celtic at the weekend.

After a couple of early attempts, the Coasters opened the scoring after just three minutes when Tasdemir was played through in acres of space and finished into the bottom corner with aplomb for his first goal for the club.

The lead was doubled just three minutes later and Tasdemir was again involved when his right wing cross was laid off by Bohan Dixon for Blinkhorn to take a touch and slot home from ten yards.

The teenager was running the show and had his second just eleven minutes in. Matty Hughes crossed from the right and Tasdemir guided a header across goal into the far corner.

Fylde extended their advantage further in bizarre fashion when Richie Baker’s right sided corner-kick eluded everyone in the box and curled straight into the Darwen goal.

Darwen fashion a rare chance midway through the half when a deep cross found Alex Ralph on the edge of the area but his curling strike was headed off the line by Steve Williams.

The lively Tasdemir really should have had his hat-trick shortly before the half-hour mark but only managed a glancing touch on Blinkhorn’s cross and the ball drifted harmlessly wide.

The Coasters were awarded their first penalty of the season when Brandon Daniels was taken down by Kallum Banks. Up stepped Tasdemir for his hat-trick and although his initial spot-kick was saved, the young midfielder reacted quickly to lap up the rebound.

The Coasters took just two second half minutes to add a sixth goal when Tasdemir whipped in an inch-perfect cross for Blinkhorn to nod past the helpless goalkeeper.

Darwen were still searching for their moment of glory and were a whisker away when winger Conor Gaul flashed a free-kick narrowly wide of the left-hand post.

The visitors got their consolation on the hour-mark when Mohammed Nabeel glanced a header from a long free-kick out of the reach of Tony Thompson.

There was a moment of embarrassment for Thompson moments later when he attempted to beat his man on the six-yard line, however Gaul got the better of the stopper and lashed home the free ball.

Blinkhorn had his chance of a hat-trick when he was cleverly slipped in by Hughes but despite half rounding Ben Proctor, the goalkeeper recovered to block his shot from the angle.

Late substitute Dan Bradley looked to get himself in on the act when he received the ball in plenty of space on the penalty spot but whipped his effort over the bar.

Darwen enjoyed some late pressure and only a fingertip save from Thompson and a header off the line prevented Gaul from adding to his personal tally.

Williams had to clear another off the line with the final kick of the game as the Coasters sailed through to the final eight of the competition.