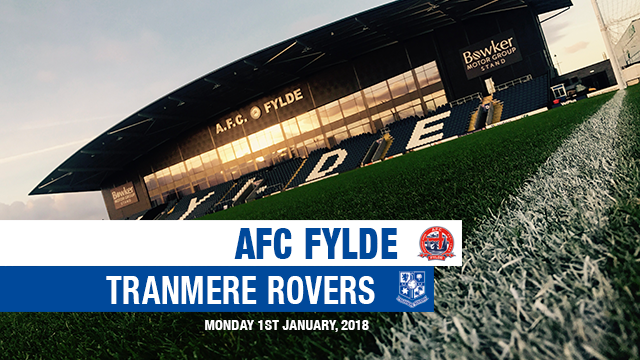 The Coasters bounced back from a Boxing Day defeat at Prenton Park to make the perfect start to the New Year with a resounding victory at Mill Farm.

The huge win moves Fylde up to 13th in the table – their highest position since August.

Coasters boss Dave Challinor made two changes – one enforced – from the side that won away at Maidenhead on Saturday with Andy Bond replacing the suspended Sam Finley whilst Matt Blinkhorn made way for Jack Muldoon.

Both sides made a blistering start to the match in the driving rain with the action flowing from end to end. Muldoon almost got his toe to Jonny Smith’s low cross into the six yard box in the opening minutes, but the danger was cleared in the nick of time.

James Norwood was the first to threaten for the visitors when Ollie Norburn’s flighted through-ball sent the forward racing in on goal, however his lacklustre attempt from the angle was well collected by Jay Lynch.

Despite the weather, the chances were coming thick and fast as Bond’s strike from 10 yards was palmed clear by Scott Davies in the Tranmere goal.

A succession of corners for the Coasters saw plenty of argy-bargy and crucially the opening goal. Smith’s free-kick from the left was fumbled by Davies and fell kindly at the feet of Danny Rowe who poked home from point-blank range.

Fully in control of the match, Fylde added a second shortly before the half-hour. Muldoon – scorer of the winning goal at Maidenhead two days previous – picked the ball up 50 yards out, bore down on goal and let fly from the edge of the area with a sublime strike in off the post.

The Coasters were in dreamland and netted a third goal in quick succession to stun their opponents. Another dangerous Smith cross was dropped by Davies and whilst Muldoon’s sliced effort was heading wide, Zaine Francis-Angol was on hand to scramble the ball home at the back post.

Getting down low to Rowe’s long range effort shortly before the break was the final action for Davies, who was brought off with a suspected injury.

Full-back Adam Buxton fashioned an increasingly rare opportunity for the away side when he let rip from 25 yards with a piledriver that was palmed around the post by Lynch.

Smith, pivotal in two of the first three goals, almost made it four soon after the restart when a clearance deflected into his path in acres of space in the box, however substitute stopper Luke Pilling stuck out a strong arm.

The afternoon continued to get better and better for the hosts and a fourth goal within the hour had hoards of Tranmere fans heading for the exits. Jordan Richards’ delightful cross from the right was flicked over the goalkeeper expertly by the head of Jordan Tunnicliffe to put the result beyond doubt.

The visitors gave themselves a glimmer of hope seconds later when midfielder Ollie Banks curled home from the edge of the area.

Having netted his first goal for the club earlier in proceedings, Francis-Angol went in search of his second when he lashed an effort narrowly wide from the left of the area.

Tranmere still looked capable of posing a threat and only a fantastic reaction save from Lynch up on his tiptoes prevented Andy Cook from lifting the ball over the Fylde stopper.

Tempers were starting to flair with the frustrated visitors and Norburn was lucky to escape with a booking after grabbing the throat of Jason Taylor with 15 minutes to play. Unsurprisingly the midfielder was substituted less than a minute later.

Goal number five arrived in the 90th minute when Rowe’s cross caused confusion in the six yard box and was inadvertently headed straight into the path of Serhat Tasdemir who had the simple task of heading into an open goal.

There was still time for a consolation strike for the disillusioned visitors when Connor Jennings was brought down by Simon Grand. The Tranmere forward dusted himself down to convert the spot-kick down the centre of the goal.