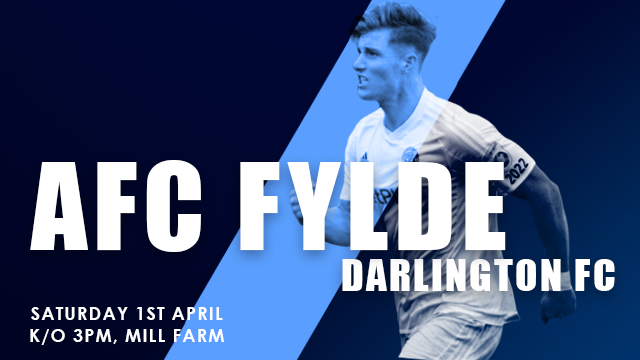 AFC Fylde produced a sensational display to see off promotion-hopefuls Darlington 4-1 in a thrilling encounter at Mill Farm.

Sam Finley opened the scoring early on with a stunning strike before Danny Rowe doubled the advantage on the hour-mark.

Darlington pulled one back through Gary Brown however Dan Bradley restored the cushion before Rowe sealed the result from the spot after Kevin Burgess had been dismissed for deliberate handball.

AFC Fylde boss Dave Challinor rang the changes after last weekend’s disappointment at Nuneaton Town with Dom Collins and Josh Langley returning at the heat of defence whilst Bohan Dixon and James Hardy were preferred to Brendon Daniels and Matty Hughes in midfield.

There was barely seven minutes on the clock when a moment of magic lit up the match. Midfielder Finley latched on to a loose ball 30 yards from goal before taking a touch and lashing an unstoppable strike into the top right hand corner leaving goalkeeper Adam Bartlett clutching at thin air.

Returning midfielder Hardy had a glorious chance to make it two moments later when Dixon raced down the left and squared across goal however Hardy’s touch let him down and the keeper reacted quickly to smother the ball.

The match was an even encounter after the goal for much of the first half-hour – Darlington’s only chance of note coming via David Ferguson’s wild swipe at the near post that flew well wide from eight yards.

Danny Rowe could and perhaps should have doubled the Coasters’ lead on the half-hour mark. The frontman nicked the ball beyond the last defender but attempted to round Bartlett rather than shoot and the goalkeeper got a fingertip to the ball to evade the danger.

Dixon was causing endless problems for the visitors with his pace and only a last ditch tackle prevented the towering midfielder from getting a shot away after he had glided past two challenges.

Andy Bond was next to try his luck and wasn’t far off at all with a left footed strike across goal that flashed wide of the far post as the half-time whistle approached.

Darlington’s Josh Falkingham had the first real chance of the second half when Mark Beck held up the ball well in the box before laying off for the midfielder however his first time effort whistled over the bar.

The visitors were started to build the pressure and captain Burgess nodded narrowly wide at the far post following an inswinging corner.

Half-time substitute Matty Hughes broke away as the Coasters hit back but dragged his strike from the edge of the area wide of the right post.

However, shortly before the hour mark the Coasters had their crucial second goal. Bradley’s cross deflected into the path of Rowe at the near post and the prolific striker smashed the ball through the goalkeeper and into the back of the net to send Mill Farm into raptures.

The aerial threat of Beck was looking Darlington’s best option and he had another chance to nod goalwards when picked out by Josh Gillies but it was comfortable Taylor.

The points were almost wrapped up with just over 15 minutes to play when Bond’s corner found Dixon in the centre and his header clipped the inside of the post before rolling back to the grateful goalkeeper.

Rowe had a chance of his own to seal the victory a minute later when he raced onto a ball over the top and after beating his man in the area, the Coasters top scorer forced Bartlett into an instinctive save.

However against the run of play, the Quakers halved the deficit. Terry Galbraith whipped in a dangerous corner from the right into the six yard box and Gary Brown rose above his marker to power a header home.

No sooner had the Darlington fans returned to their seats and the Coasters restored their two goal advantage. Matty Hughes did fantastically well to pick out Bradley in the area and the midfield man kept a cool head to slide the ball past Bartlett.

The drama continued in an electric second half as the Coasters went further ahead. Dixon rounded the keeper and his goalbound effort was blocked on the line by the hand of Burgess, who was dismissed and Rowe dispatched the resultant penalty with aplomb.

Bond looked to get in on the act in the dying moments when he broke into the box and with no options in the middle, he went for goal himself, forcing Bartlett into another reaction save.