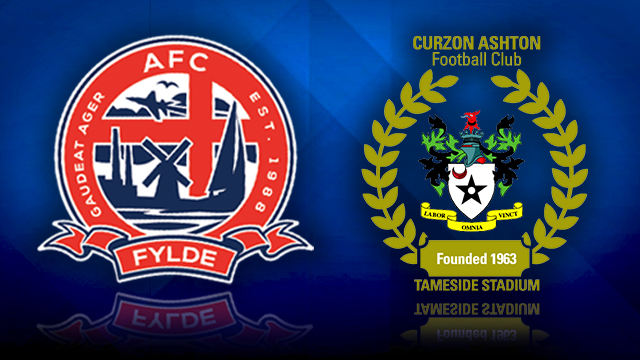 AFC Fylde striker Danny Rowe hit his third hat-trick of the season inside nine games as the Coasters climbed back to the top of the league with a resounding 4-1 victory over Curzon Ashton.

The frontman opened the scoring early on at Mill Farm before Bohan Dixon doubled the lead after the break. The hosts were given a scare when Matthew Flynn prodded home however Rowe had the final say with two goals in final 20 minutes.

Dave Challinor named the same side that drew with Gloucester City at the weekend and it was the Fylde top scorer who was the first to try his luck when he latched on to Danny Holmes’ right wing cross but he couldn’t find the target with a flicked header.

Fylde full-back Tom Kennedy whipped in a succession of dangerous corners and Dixon wasn’t far off with a glanced header from the second.

It didn’t take long for Rowe to make an impression on the game and the first goal duly arrived on 12 minutes. James Hardy tricked his way to the edge of the box before squaring the ball to Rowe who curled home left-footed into the top scorer at the first time of asking.

Fylde continued to knock on the door and Dixon was again close when he met Hardy’s inswinging corner. Sam Finley almost added his name to the scoresheet when he cut inside Chris Rowney before curling a foot wide of the right hand post.

The Coasters thought they had a penalty when Hardy was brought down in the area on the half-hour mark however the referee saw it differently and presented the former Manchester City man with a yellow card for his troubles.

Full-back Joe Guest had the first real opening for Curzon when he fizzed a first time strike well wide after the visitors had been allowed far too much time on the edge of the Fylde area.

The left back was looking Curzon’s biggest threat as he fired a vicious free-kick straight down the throat of Coasters’ stopper Tony Thompson.

The hosts hit straight back with a double chance of their own when first Dixon was denied by a full length save from Hakan Burton before Finley saw his fine strike from 20 yards crash back of the far post.

Curzon started the second half brightly and striker Niall Cummins was a whisker away from getting a toe to Luke Clark’s low ball into the centre.

However it was Fylde that stuck the next clinical blow when Rowe slipped in Dixon who in turn slid home from 10 yards.

The second goal sparked some life into Curzon’s attack and moments later they were back in the game. Guest crossed from the left and defender Matthew Flynn poked home with the aid of a deflection to wrong foot a helpless Thompson.

The Coasters almost instantly restored their two goal advantage when Dixon galloped down the right before cutting the ball back to Finley who saw his snapshot diverted around the post.

With just over 20 minutes to play, Fylde had their cushion. Hardy tested Burton with a shot from the edge of the box and whilst the stopper pulled off a great one handed save, Rowe was there to lap up the rebound.

The visitors hadn’t given up hope and only the frame of Williams prevented substitute Ryan Hall from lashing home.

Challinor introduced new boy Ryan Jennings with 10 minutes remaining and the former Wigan Athletic man made an immediate impact racing down the right before delivering an inch perfect cross that flicked off the top of Matty Hughes head and away to safety.

Rowe was handed the perfect opportunity for his hat-trick in the dying seconds when Fylde were awarded a free-kick 20 yards from goal and the frontman duly obliged smashing the ball low into the bottom left hand corner.